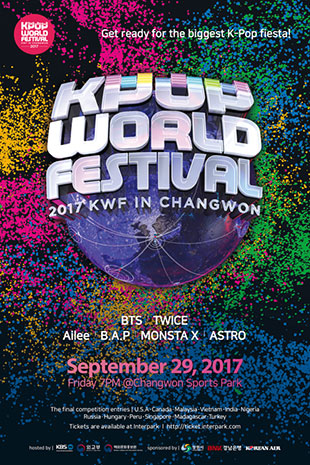 The 2017 K-Pop World Festival (KWF) in Changwon revealed its lineup for the upcoming event.

The KWF gathers contestants from 72 different countries. Preliminaries are held to narrow down the group to a number of 12 teams.

In addition to performances from the festival contestants, k-pop artists will be present to perform as well. This year the lineup includes BTS, TWICE, Aileee, BAP, MONSTA X and ASTRO.

The 2017 KWF in Changwon will be held on September 29th at 7 PM KST. The event will also air via KBS 2TV and KBS World.