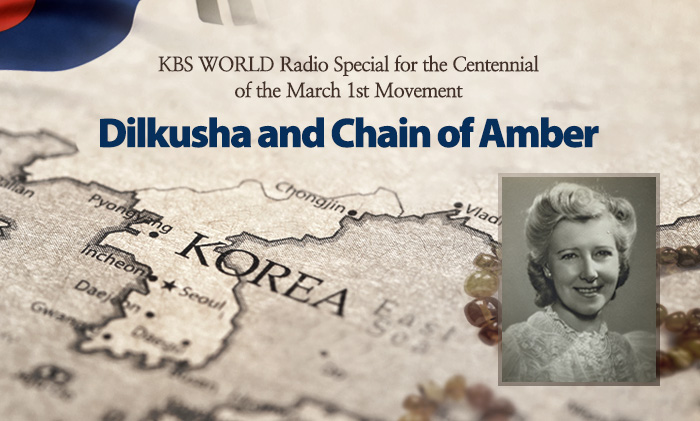 Jennifer Linley Taylor, an artist living in California, heard much about her father Bruce Taylor’s childhood home, Dilkusha, in a little-known country named Korea. Bruce had talked a lot about how he grew up in the house, the name of which meant “Palace of Heart’s Delight” in Sanskrit. His final wish was to return to his hometown, inspiring Jennifer to donate her family memorabilia to Korea. Now the precious Taylor family artifacts are showcased in a special exhibition at the Seoul Museum of History.

“Dilkusha and Chain of Amber” is a long story involving three generations of Taylors, starting with Bruce’s parents, Albert and Mary Taylor.

Dilkusha was a Western-style house built next to a gingko tree by Bruce’s parents, Albert and Mary Taylor. They lived there until they were forced to leave Seoul in 1942. Dilkusha was truly a “palace of heart’s delight.”

The Taylors witnessed the March 1st Independence Movement and the efforts of the Korean people endeavor to wrest back their country’s sovereignty from Imperial Japan. Albert Taylor played a pivotal role in Korean history as a foreign correspondent who risked his own safety to smuggle the Korean Declaration of Independence out of the country and tell the world about the brutal oppression suffered by the Korean people under Japanese colonial rule.

Even after the Taylors were forced to leave Seoul, their house Dilkusha remained for 96 years in place next to the gingko tree. The house bore witness to nearly a century of modern Korean history, from the country’s independence movements and liberation and the Korean War to rapid industrialized urbanization.

We hope to follow the lives of Albert and Mary Taylor and gain new insights into Korea’s independence movement. This brave couple will also remind us of the resilient patriotic spirit of the Korean people that never faltered, even during the darkest times of the colonial period.