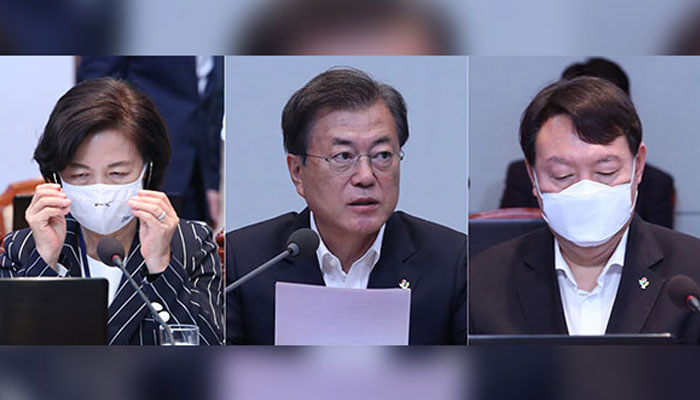 The so-called Choo-Yoon discord between Justice Minister Choo Mi-ae and Prosecutor General Yoon Seok-youl, which dragged on for much of 2020, led to an unprecedented suspension of the chief prosecutor.
The main factors behind the conflict were prosecutorial reforms, and the direction of the prosecution's investigations into sensitive cases involving ruling camp figures.
In other words, it was Choo's push for democratic control of the prosecution pitted against Yoon's resolve to defend the state agency's autonomy and neutrality.
After carrying out an extensive reshuffle of senior prosecutors when she took office at the start of the year, the minister exercised her right to command sensitive cases, removing the top prosecutor from directing investigations.
Choo also criticized investigations into the presidential office's alleged meddling in the 2018 Ulsan mayoral race and the government's alleged data manipulation regarding the decommissioning of the Wolseong-1 nuclear reactor for being politically motivated. The minister then ordered an inspection into the chief prosecutor and launched the disciplinary process. Such moves prompted prosecutors nationwide to take group action, such as issuing a statement of protest.
Meanwhile, the ruling Democratic Party(DP) pushed ahead with revising laws on adjusting investigative powers between the prosecution and the police, and setting up the powerful Corruption Investigation Office for High-ranking Officials(CIO), despite strong protest from the opposition.
Yoon ultimately became the country's first prosecutor general to be suspended for two months, but at the same time, he is leading in opinion polls on presidential hopefuls.