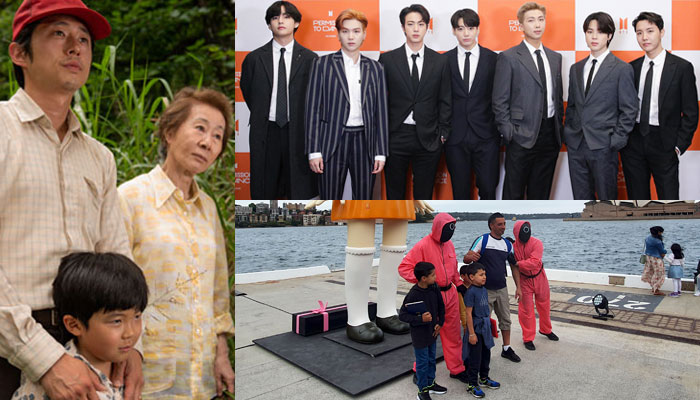 BTS impressively marked the year by winning three prizes at the American Music Awards(AMAs), including becoming the first Asian act to win Artist of the Year. The seven-member group’s single “Butter” released in May stayed on the Billboard Hot 100 chart for ten non-consecutive weeks, followed by two other chart-topping singles, “Permission to Dance” and “My Universe” in collaboration with Coldplay.

“Minari,” Korean American director Lee Isaac Chung’s semi-biographical movie, is about a Korean immigrant family that settles on a farm in Arkansas during the 1980s. After winning both the U.S. dramatic grand jury prize and the U.S. dramatic audience award at the Sundance Film Festival in 2020, “Minari” swept various awards this year, including one for best foreign language film at the Golden Globes.

“Squid Game,” a Netflix drama series about people deeply in need of money and agreeing to participate in a deadly survival game, became a global trend.

The series’ commercial success continued long after its premiere on September 17. Over 142 million households worldwide have watched the program, which topped Netflix’s global ranking for a record 46 consecutive days.

Amid global popularity of Korean traditional games and food that appeared in the series, “Squid Game” has contributed to promoting Korean lifestyle and culture around the world.