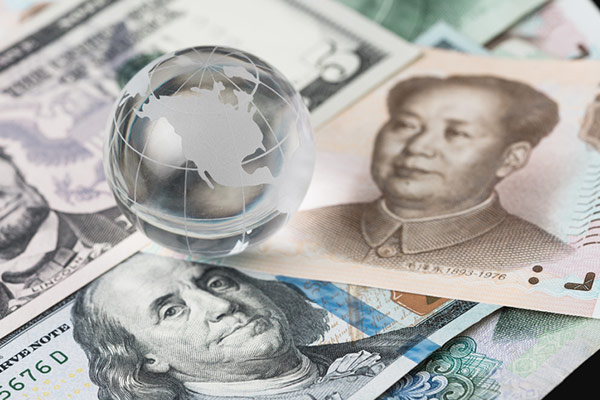 On July 24, the People’s Bank of China set the yuan reference rate at 6.7891 per dollar, 0.44 percent weaker than the previous day, when the yuan appreciated for the first time in eight trading days. But just one day later, the Chinese currency depreciated again. A weaker yuan could benefit Chinese exporters and help stimulate the local economy. China is using its currency policy in a way to minimize damage from its trade war with the U.S. and to resolve various domestic problems, including the ones related to the housing market and industrial restructuring. A trade war can be described as a tariff war. The U.S.’ tariffs on Chinese goods will make the products expensive in the American market. China is devaluating its currency to neutralize the U.S. tariff offensive.

On July 24, China’s central bank devaluated the yuan at the lowest level against the dollar in a year. The following day, it also set the yuan reference rate at 6.8 against the dollar. The rising dollar-yuan exchange rate means the yuan is depreciating. The sharp decline in the value of the Chinese yuan can be explained in the context of trade tensions between China and the U.S. On July 19, U.S. President Donald Trump accused China and the European Union of manipulating their currencies. A few hours later, China devaluated the yuan at 6.7671 per dollar, in an apparent move to strengthen its fiscal and monetary policies in preparation for protracted trade friction with the U.S. As the yuan has continued to drop against the dollar, concerns are rising about a currency war triggered by the trade conflict between the world’s top two economies. U.S. Treasury Secretary Steven Mnuchin has said that the U.S. will be closely monitoring whether China has manipulated its foreign exchange rate. Some analysts are raising the possibility that the U.S. might designate China as a currency manipulator in October.

The Treasury Department set three criteria for designation as a currency manipulator. The three conditions are: an annual trade surplus with the U.S. exceeding 20 billion dollars; a current account surplus surpassing 3 percent of the country’s GDP; and a persistent, one-sided engagement in the currency market with a net purchase of foreign exchange exceeding 2 percent of the GDP. China certainly meets the first condition, as it enjoys about 300 billion dollars worth of annual trade surplus with the U.S. The figure is far higher than the 20 billion set by the U.S. But China does not meet the other two conditions. Its current account surplus is equivalent to a mere 1.4 percent of its GDP. It is true that China has intervened in the currency market consistently—for a year. But the scale is pretty small, and it has been two-way intervention, not one-sided.

For now, the possibility of China being designated as a currency manipulator is low. But the Treasury Department might change the criteria. If it applies an old law, known as the Omnibus Trade and Competitiveness Act, China will be in trouble.

If China is named a currency manipulator in October, the U.S. will stop providing financial support to American companies investing in China. Therefore, U.S. companies will find it difficult to invest in China. Also, Chinese firms cannot join massive public projects in the U.S. Many Chinese businesses may have to go through restructuring. The International Monetary Fund will strengthen monitoring of the Chinese yuan. The U.S. will also take additional financial retaliatory measures against China. All these factors are expected to bring great confusion to global financial markets and subsequently affect real sector markets as well.

Bloomberg says that a currency war between the U.S. and China will not only affect the global foreign exchange market but also make equities, oil and emerging-market assets tumble. It also predicted that smaller, open countries like South Korea, Hungary and the Czech Republic would be the biggest losers in a global trade conflict. In an intensifying currency war, countries like South Korea, which imports raw materials or parts and exports finished goods, will lose their competitive edge on exporting, due to rising import prices. For example, Japan, which waged a trade war with the U.S. in the 1980s, endured the “lost 20 years” in the aftermath of the Plaza Agreement that extremely strengthened the Japanese currency against the greenback. Dollar prices of Japanese products soared, resulting in sluggish exports and a long period of recession. On the flip side, a currency war between China and the U.S. may benefit the Korean won and the nation’s stock market.

In line with the depreciating Chinese yuan, the value of the Korean won may also fall to have a positive effect on Korea’s exports. But the yuan may appreciate again due to pressure from Washington, a change in the market environment or China’s own interest.

The appreciation of the yuan may leave room for the Korean stock market to rebound and influence the local bourse and the Korean currency in a positive way.

When the yuan remained weak in 2015 and 2016, a large sum of foreign capital flew out of the country. To prevent a similar situation from occurring, China may refrain from keeping the yuan lower in its currency war with the U.S. If the yuan appreciates, the Korean won and the stock market could also rise, as the yuan and the won maintain a coupling correlation. In other words, the Korean currency and the bourse are synchronized with the movements of the yuan and the Chinese stock market. However, South Korea needs to consider downside risk factors of the fluctuation of the Chinese currency as a result of Washington’s pressure. A setback in China’s exports and an economic slowdown in China will deal a blow to South Korea, which sells a lot of intermediary goods to China. That’s why South Korea needs to prepare appropriate countermeasures against the deepening currency war.

In the mid and long term, it is necessary for South Korea to diversify its export destinations and secure production bases in different countries, other than China. Small-and mid-sized firms, in particular, have very few means of monitoring macroeconomic indicators such as foreign exchange fluctuations and interest rate changes. The government should provide the important information to the companies so they can use it properly. It should also send them timely warning messages whenever necessary to help them cope with the situation quickly and effectively.

The trade-dependent South Korean economy is vulnerable to a global economic crisis. A currency war between the U.S. and China may break out at any time. To minimize any fallout, South Korea will have to carefully analyze the changes in the external environment and come up with ways to diversify its export markets.