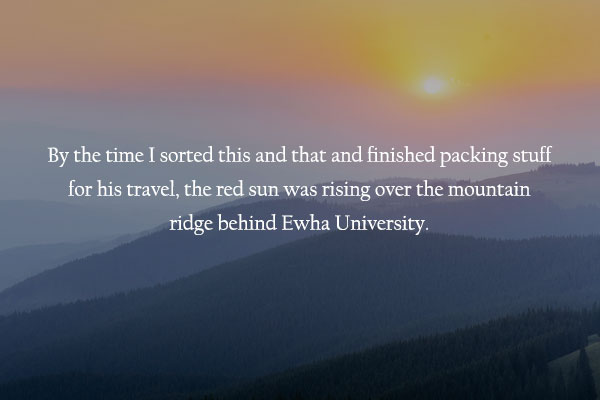 I missed him more as I got older, so much so that I couldn’t have mourned enough for him in my lifetime. His name was Shin Hyeon-seok. He was 37 at the time and would have been 48 this year if he had lived.

The main character then remembers a man who sacrificed himself to help other people. “Gongsantowol” was written to commemorate him.

Lee published “Gwanchon Essay” as a serial novel, because it contains the tragic experiences of people, including the writer, who lived through the rough times. The characters in this story are, in a way, in the same community since they all experienced Korea’s turbulent modern history. “Gwanchon Essay” is a collection of that community’s experiences.

Stoneworker was becoming the most exemplary worker. He wasn’t diligent only at his farm work. He never missed affairs, big or small, in even the neighboring village.

He doggedly and earnestly did his work.

He even dressed my mother in her funereal garb. Her grave was made by him as well.

At the time I was a young teenager, in the second year of middle school, but I had to think about how to repay his sincerity. That was my long-standing assignment.

Unfortunately, the stoneworker has leukemia at the young age of 37 and returns home to die. The description of how the sun rose above the mountains behind Ewha Womans University represents his attachment to life. This last scene represents his big heart as well as the author’s childhood experiences that were dreary yet bucolic.

“I wish you luck so that I can see you again. Goodbye.”

I was determined to offer my hand for a handshake this time.

By the time I sorted this and that and finished packing stuff for his travel, the red sun was rising over the mountain ridge behind Ewha University.