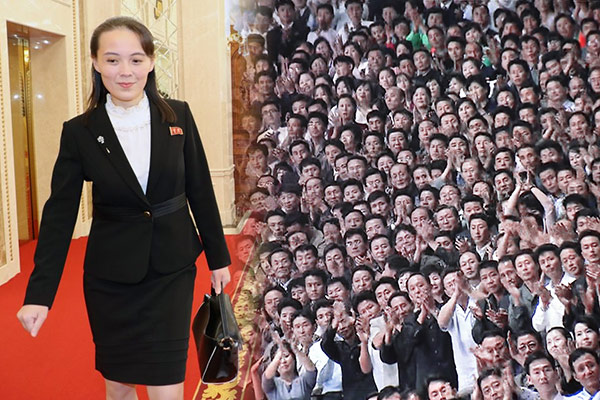 In North Korea, leader Kim Jong-un and his sister Kim Yo-jong’s direct lineage to the country’s founder Kim Ill-sung is heavily emphasized. Notorious for its rigid social hierarchy, North Korea places utmost importance on the supremacy and legitimacy of the ruling Kim family and its so-called ‘Baekdu bloodline’.

The people in North Korea are classified into three classes: the core class, the wavering class and the hostile class.

After massive political purges in 1958, North Korea felt the need to control possible internal political threats by sorting out those who were loyal or disloyal to the regime. After years of investigation the Workers’ Party established the three new classes along with 51 subcategories.

Residents are roughly familiar which class they belong to. If they are not allowed to go to college or enter the ruling Workers Party, they realize they are members of the hostile class, not the core class. But they don’t know exactly where they are positioned among the 51 categories. Only the Workers’ Party knows the specifics, as the party manages relevant records on every single citizen.

Since it was founded in 1948, North Korea clams to advocate a “Workers’ Paradise” in the nation. In Article 70 of its constitution, it says that all able-bodied citizens choose occupations in accordance with their wishes and skills. In reality, however, this is nothing but political rhetoric.

From 1958 to the late 1960s, North Korea classified all residents into three different groups: a loyal “core class,” a neutral “wavering class” and a politically unreliable “hostile class”. Residents were further divided into 51 subcategories. The categorization was based on one’s family’s activities during the Japanese colonial rule of Korea and the Korean War.

Introduced by then-leader Kim Il-sung, the sociopolitical classification was modeled after the Soviet Union’s status system from the 1950s and the ‘60s. In North Korea, the highest group is the core class.

The core group consists of descendants of people who did not commit crimes during the colonial era and the Korean War, and those who didn’t belong to any religion. Crimes here refer to reactionary activities. Theoretically, members of the core class are poor farmers, laborers and those who do not own any assets.

The top of the class is occupied by the “Baekdu bloodline,” the three-generation linage of the ruling Kim dynasty from Kim Il-sung to Kim Jong-il and on to Kim Jong-un. The core group also has the so-called “Baekdu stem” or descendants of those who fought as partisan guerillas or as soldiers in the Korean War. They are mostly high-ranking officials of the government and the party.

The privileged class holds power and lives in wealth and honor. Its members are entitled to various benefits, including the right to enter the prestigious Kim Il-sung University. Former leader Kim Jong-il, his sister Kim Kyong-hui(김경희) and the current leader’s sister Kim Yo-jong all studied at the university.

The core class includes the ruling Kim family, descendants of peasant families during the Japanese colonial occupation. Anti-Japanese resistance fighters and families of soldiers who participated in the Korean War are also part of the highest caste level.

Together, they comprise the ruling class of the North Korean regime. The elite core class accounts for roughly 30 percent of the population and enjoys privileges in food rationing, housing, employment and education. Members hold on to their status and pass it down to their children, unless some grave crime is committed.

The next group down, the wavering class, makes up about 50 percent of the population. It consists of small-scale merchants, office workers and laborers. The bottom group or hostile class is reserved for those who have been branded as traitors or so-called “rebellious elements.”

The hostile class, also known as the complex group, includes capitalists, landlords, religious people and political prisoners. Their status was decided before and after the Korean War, and some 93-thousand ethnic Koreans from Japan were later added to this group. Members of the hostile class cannot join the military, since the party suspects they would take up arms against the regime.

If your father is taken to a political prison camp, you fall into the complex masses right away regardless of your previous status. This is because family members are punished as well under the infamous practice of “guilt by association,” which is enforced in the most brutal way anywhere the world.

Simply put, those who betray or do not follow the Workers’ Party are all classified as complex masses.

In short, North Korea’s lowest caste level, the hostile class, is blocked from engaging in normal social activities. These people cannot enter the Workers’ Party, no matter how smart or talented they are, and they can’t serve in the military.

They are driven to difficult, labor-intensive work shunned by most other people, such as farming or mining. Of course, it is hard to marry and have a family in this low caste level.

In North Korea, the status of citizens is determined by the party, regardless of individual merit. It is extremely difficult to elevate one’s status. Mr. Ahn explains why North Korea adheres to such a strict caste system.

The purpose is to maintain the regime. The royal family of the Joseon Dynasty retained the kingdom for 500 years in collusion with the noble or yangban(양반) class. The same is true of North Korea. Like Joseon’s royal family, the ruling Kim family joins forces with the modern version of yangban and the military to control the lower classes. By dividing classes, the regime maintains society by force. If the caste structure is removed, I’m sure North Korean society would not last a month.

North Korea is known as the most cloistered country on Earth. Isolated from the outside world, North Korean society is strictly controlled and monitored by the state.

The rigid caste system, in particular, is a key tool of sustaining the socialist regime. By classifying the entire population into three distinct loyalty groups, the regime singles out potential threats and controls them politically and socially. The groups are discriminated against in terms of the provision of food, clothing and shelter as well as education and jobs.

The caste system serves as a brainwashing tool, convincing people that absolute loyalty to the Kim family is their only hope to move up in society.

In North Korea, children inherit their parents’ status. In other words, children of criminals are also criminals.

In rare cases, those who became heroes can elevate their status to a higher level. Dozens of soldiers have been able to do so after holding and protecting a portrait of Kim Ill-sung when a grenade exploded, for example. But the number is miniscule in a country with a population of 25 million.

So, upward social mobility or redistribution of wealth is near-impossible under North Korea’s status system. This pyramid-type social hierarchy will not change unless there is a revolution.

As Mr. Ahn explained, one’s social status can be raised when he or she demonstrates special loyalty to the Kim family or the party. But that’s possible in only exceptional circumstances. All in all, the sociopolitical classification is a source of unfair discrimination to the North Korean people. But the system continues to be upheld, as people fear for their own survival.

But there are cracks appearing in the caste system. The rise of market forces has provided new opportunities to the people of North Korea.

North Korea’s socialist economy began to collapse after severe famine and economic hardships in the mid to late 1990s. As a result, markets gave rise to a new class of wealthy but politically uninfluential individuals. These days, the US dollar and the Chinese yuan have become more powerful than the local currency in the North. In this sense, social status is being reorganized.

Markets have flourished in border areas such as Sinuiju(신의주) and Chongjin(청진). Many high earners there are from the lowest caste level, the hostile class, including ethnic Koreans from Japan.

They probably learned business skills from their parents or channeled their grievances at the system into money making endeavors.

Whatever the reasons, rich individuals are elevating their status. They can be admitted to Kim Il-sung University if they donate somewhere between 30 to 50-thousand dollars. In this way, a growing number of North Korea’s newly rich are making efforts to achieve better academic and social recognition. It’s no exaggeration to say that the previously fixed social ladder in North Korea has begun to crumble.

In line with increasing individual economic activities since the 2000s, North Korea has seen some upward mobility.

However, North Korea’s status system continues to create a highly regimented society. It remains to be seen how much longer this can be sustained as new money and information flow into the country.