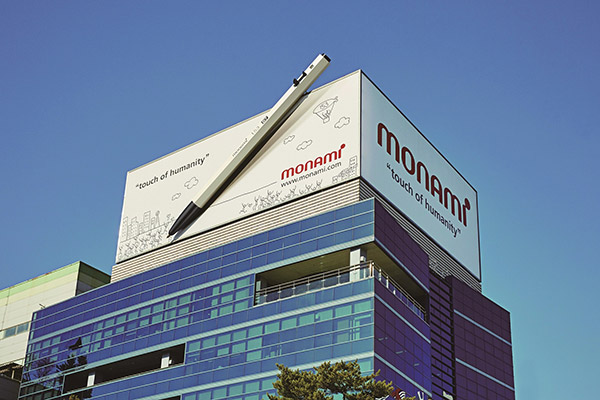 Today, we introduce you to Monami, a writing instrument maker that has been shaping the history of Korea’s stationery industry. Let’s hear from Shin Dong-ho, head of the Marketing Team at the company.

Monami is a familiar and established stationery brand here in Korea. Monami’s iconic ballpoint pen was conceived by the company’s first president Song Sam-seok(송삼석) in 1962, when he happened to see a ballpoint pen at an exhibition. At the time, many Koreans used fountain pens that had to be dipped in ink bottles. Song was intrigued by the new pen that didn’t need an ink bottle. He was confident that the convenient pen would appeal greatly to consumers.

After much market research and experimentation, Monami released its new 153 ballpoint pen in May 1963. The numbers “153” originated from the pen’s price of 15 won at the time and the fact that it was only the third product ever made by the company, after paints and pastels. Monami 153 is still being used to this day and is one of the most popular ballpoint pen models in Korea.

The company started in 1960 as Kwangshin Chemicals, a drawing materials supplier. Three years later, the company introduced the Monami 153, Korea’s first oil-based ballpoint pen that changed the nation’s stationery industry forever. The name, Monami, comes from the French “mon ami,” meaning “my friend.” Monami 153 has since dominated the domestic pen market and can be seen everywhere—companies, schools, homes – anywhere one may need to write. Indeed, Monami 153 is a “friend” of Koreans.

Of course, such success did not come easily for the company.

When Monami 153 was released, many were reluctant to switch over from pen and ink sets. There was even a false rumor flying around that the use of ballpoint pens would result in poor handwriting.

The company invested an astounding amount of money in promoting the advantages of the oil-based ballpoint pen, such as portability and ink that did not smear. The company’s monthly advertising budget amounted to 6 million won, making Monami the second largest spender on advertising among domestic firms at the time.

Before Monami 153 hit the market, companies and government agencies in Korea used fountain pens almost exclusively. But the ink required frequent refilling, and fountain pens themselves were prone to rip the paper. To help ease the inconvenience, Monami produced a brand-new ballpoint pen. But consumers, entrenched in their ways, were unwilling to embrace Monami overnight.

To attract the attention of consumers, Monami spent a lot on advertising and worked hard to improve product quality, conducting numerous performance tests before releasing the product.

Monami 153 has a long, white hexagonal body and a black push button at the end. It consists of just five essential components—the shaft, the head, the push button, the spring and the cartridge. Thanks to this simple, practical and economical design, the ballpoint pen is durable and easy to use.

Since it first launched in 1963, 4.3 billion Monami 153 pens have been sold. If they were all connected end to end, they would go around the earth 14 times. Called the “people’s ballpoint pen,” Monami 153 has been loved by consumers for decades.

The company produced a limited edition of the Monami 153 ballpoint pen in 2014 in commemoration of the 50th anniversary of its flagship product. A total of 10-thousand units were sold out within an hour, proving their continued popularity. The success of “Monami 153 Limited” showed the company’s capability and potential to enter the premium stationery market.

Shortly after, the firm released premium versions of the original 153 ballpoint pen, in the belief that high consumer loyalty to Monami will certainly pay off. The company has also collaborated with various businesses, including Hyundai Motor, Kakao Friends and Baskin Robbins, among others, to approach local consumers in a closer and more honest way. 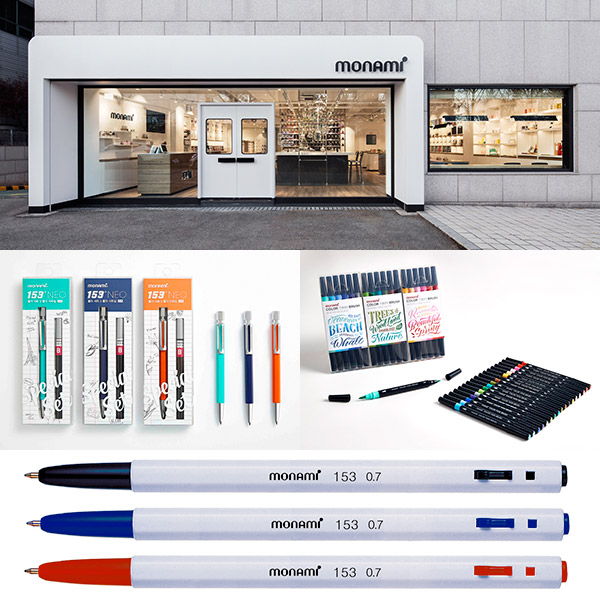 The “Monami 153 Limited” maintained the basic design of the original—the hexagonal shaft and the black push button. But the body was made from a silver-colored metallic material instead of white plastic, and the ink quality was of a higher grade. The luxury pens were priced at 20-thousand won or about 18 US dollars, and sold out instantly – all ten-thousand of them. The pens were trending online, and soon some online auction sites were reselling them at 300-thousand won a piece.

Encouraged, Monami introduced an entire line of premium products, including “153 Black & White” and “153 Neo.” In doing so, the company successfully built a luxurious and trendy image on top of its original identity.

Capitalizing on the power of Korea’s pop culture, the company unveiled a limited edition 153 ballpoint pen to commemorate a 2016 concert of the popular K-pop group Big Bang. In addition, Monami has opened concept stores at the Dongdaemun Design Plaza in Seoul and in Yongin, Gyeonggi Province. These strategies are aimed at attracting a wide variety of customers through superior technology and collaboration with other industries. And Monami’s market is not just limited to Korea.

Monami has explored foreign markets aggressively. It is now exporting products to some 100 countries, including China and Turkey. Monami’s pastels are extremely popular in Turkey, in fact, and controls some 70 percent of the market. The company has established sales offices in Thailand, China and Poland to better interpret and respond to local consumer trends more precisely and carry execute marketing plans more effectively.

The stationery maker continues to grow even as the pen market overall has declined even as more consumers write exclusively on their computers and smart devices. In addition to ballpoint pens, the company is also focusing on special-purpose markers as well.

Markers are also one of Monami’s strong points. Markers with innovative and differentiated functions can be used on watery kitchen utensils, on circuit boards or on sheets of steel in aircrafts and ships. Using diverse types of ink technology, the company’s research center has been developing special markers that can be used at different industrial sites.

The company’s products include a nature-friendly marker that can be used on wood and a kitchen marker for wet appliances or plastic. Monami is expanding the scope of the writing tool market with its high-performance products. Having been Korea’s old stationery friend for nearly sixty years, Monami will continue to remain a good and reliable partner in the ensuing decades.