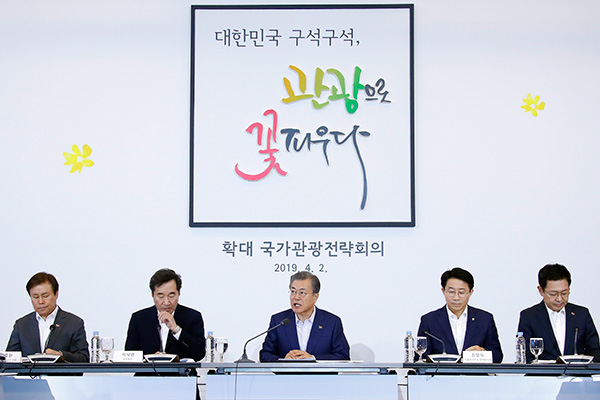 In 2017, global tourism spending reached 1.34 trillion US dollars, with international tourist arrivals posting the highest growth since the 2009 global financial crisis. Tourism is the world’s third largest export category, after fuels and chemicals, accounting for 10 percent of global GDP.

The Korean government has recently unveiled a strategy to boost tourism to the country. Today, we’ll discuss what the plan entails and what needs to happen for it to be a success with Lee Hoon, Professor or Tourism Science at Hanyang University.

President Moon Jae-in presided over a national tourism policy meeting on April 2 to discuss ways to attract more international tourists to Korea and also promote domestic travel to stimulate regional economies. During the meeting, tourism officials set goals of increasing the number of foreign tourists to Korea to 23 million by the year 2022 and creating 960-thousand new jobs in tourism and related industries. Dispelling concerns that he was neglecting the industry, President Moon attended the meeting for the first time. For the tourism sector, it is welcome news that the government has presented a long-term strategy, along with detailed plans aimed at bolstering tourism.

The Korean government has rolled up its sleeves and gotten to work on improving the country’s tourism industry. It hopes that it can provide a much-needed boost to the economy by encouraging international travel to and domestic travel within Korea in the coming years. For that purpose, Moon promised to simplify visa rules, designate and cultivate regional cities as tourism hubs, and support tourism startups.

The new tourism strategy has three main points. First, the government will ease visa rules to draw more visitors from China, Vietnam, the Philippines, Indonesia and India. Second, four local municipalities will be developed into regional tourism hubs, and tour programs will embrace more cultural content, including K-pop, to attract foreign fans of Korea pop culture. Also, Daehangno(대학로)—an art and entertainment district in Seoul—will be will be revamped in efforts to transform it into Korea’s version of Broadway. Lastly, the government will increase its financial subsidy for the tourism sector to a level similar to the manufacturing industry. To be more specific, it will provide tourism ventures with up to 200 billion won, or about 180 million US dollars.

An overwhelming 78 percent of foreign tourists stay in the capital city of Seoul when visiting Korea. In fact, the rest of the country attracts less than 10 percent of all foreign tourists, not including Jeju Island and the southeastern port city of Busan. Apparently, the overwhelming majority of visitors to Korea believe – rightly or wrongly – that there isn’t much to do or see in large parts of the country.

To diversify travel destinations among foreign tourists, the government and tourism industry have come up with several measures. One such policy includes extending multiple-entry visas to Chinese nationals that reside in the country’s more economically prosperous cities. Currently, the visas – which allow for unlimited entry and exit to and from Korea during a certain period of time – are only available to residents of Beijing, Shanghai, Guangzhou and Shenzhen

Another proposal put forth by the government to improve Korea’s tourism sector is more aggressive marketing and incorporation of Korean pop culture, as well as expanding tourism to the Demilitarized Zone, or DMZ. President Moon has suggested that the border separating the two Koreas could be developed as an eco-tourism zone.

These measures, combined with industrial subsidies, reflect the need to revitalize the country’s struggling tourism industry.

By volume, the Korean tourism sector has expanded. The number of domestic travelers has steadily risen over the past half-decade, and inbound tourists from overseas has also increased, averaging 10 percent per annum. But the industry overall has been hit hard in recent years due to geopolitical circumstances, such as China’s retaliation over a missile defense system Seoul decided to deploy and diplomatic tensions with Japan. Moreover, there is growing competition from other countries looking to attract tourists. Now, the Korean tourism industry must achieve qualitative improvements to be competitive. It has been doing well, but it’s time to take a new leap forward.

In a 2017 report by the World Economic Forum, Korea ranked 19th out of 136 countries in terms of travel and tourism competitiveness, up 10 spots from 2015’s report. The improved metric suggests growing international interest in tours featuring Korean pop culture as well as improvements in overall services.

Obstacles to growth remain, however. In addition to some geopolitical hurdles, Korea’s tourism industry suffers from structural problems such as excessive commission fees charged by duty-free shop operators and other retail outlets, as well as repetitive, outdated, or otherwise low-quality package tours and courses to Korea.

Perhaps most importantly, it does not appear that the government is making sufficient efforts to attract foreign visitors compared to other countries.

Japan has devoted significant resources to its tourism industry for much of the past two decades in a strategic move aimed at dealing with a long economic recession. Japanese decision-makers meet regularly to discuss tourism-related policies and initiatives and updates them accordingly. At present, tourism accounts for some 7.4 percent and 6.9 percent of the nation’s GDP and employment, respectively.

In comparison, it was only in 2017 that Korea got around to crafting a tangible tourism plan set across multiple years, and there remains no central body or ‘control tower’ for decision-making.

The current government abolished a cabinet post that was in charge of tourism, weakening cooperation among government departments in this space and demonstrating a lack of priority regarding the sector. This was underlined at last week’s tourism conference, where Moon’s prime minister chaired the meeting instead of the president, as was typical at these conferences in the past.

Korea’s global ranking in tourism competitiveness jumped to 19th in 2017, but the government’s tourism expenditure and priority on tourism remained 87th and 44th, respectively. It needs to expand support for this sector.

Korea can learn from Japan regarding how best to approach the tourism sector. In 2013, Japanese Prime Minister Shinzo Abe declared that he would promote Japan as a tourist destination. Accordingly, the country eased visa issuance requirements and increased the number of duty-free shops tenfold. As a result, Japan has recorded surpluses in annual tourism since 2014.

Professor Lee points out that Korea, on the other hand, lacks state-directed tourism policies and therefore needs to build a new system to manage the industry more effectively.

Korea is an attractive country with a free-spirit and dynamism that is well-reflected in music, movies, and TV shows that are popular overseas. Korean fashion and beauty products are also resonating abroad.

There is clearly a market for all-things Korea. Let me take an example of royal palaces in Seoul. Tourists may simply visit there and look around the beautiful palace buildings. But the creative idea of nighttime tours offers a wonderful reinterpretation of the ancient cultural assets, turning them into a great tourist attraction for locals and foreigners alike. Indeed, there are many creative souls in Korea. If the government provides them with more opportunities, such individuals will be able to craft more attractive tourism programs.

I think the president should demonstrate his commitment to the tourism industry by chairing the meeting at the industry conference. Moreover, the event should be held on a regular basis to enable more centralized decision-making. The government also needs to increase its budget for research and development in tourism and expand employment in the sector.

The Korea Development Institute says that a stronger service industry may lift Korea’s GDP growth by up to 1 percentage point and generate 150-thousand jobs.

12 years ago, 6 million foreign tourists visited Korea. The number shot up to 15 million in 2018, indicating that tourism to Korea has tremendous potential. It is necessary to identify the reasons behind this growth and come up with appropriate measures to promote the tourism industry into the future.