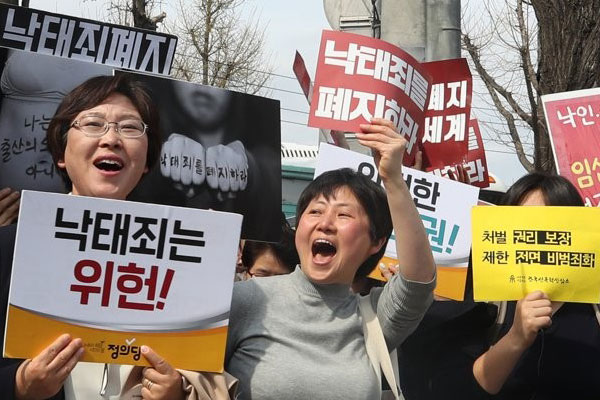 In a seven-to-two vote, the Constitutional Court decided on Thursday that an outright ban on abortion goes against the Constitution, as it prioritizes protecting the life of a fetus while infringing on a woman's right to make her own choice.

Two-thirds of the nine-justice panel are required to reverse a ruling.

The adjudication comes 66 years after South Korea first enacted the laws in 1953, banning the termination of an unborn fetus in nearly all cases.

The latest decision overturns a 2012 narrowly upheld the 1953 laws in a four-to-four vote and said the fetus is a separate entity from the mother and that its right to life must be protected.

The court also called for amendments by the end of next year to the current 1953 laws to partially allow abortions in the early stage of pregnancy.

The court said that punishing physicians for conducting an abortion with a woman's consent is also unconstitutional.

In 2017, an obstetrician filed a complaint after he was charged in 2013 for performing an abortion with a woman's consent.

The doctor argued that Article 270 of the Criminal Code, which states that a physician shall be imprisoned for up to two years for conducting an abortion, infringes upon the woman's right to choose.

Under Article 269 of the Criminal Code, a woman who aborts an unborn fetus is subject to a prison term of up to one year or two-million-won fine.