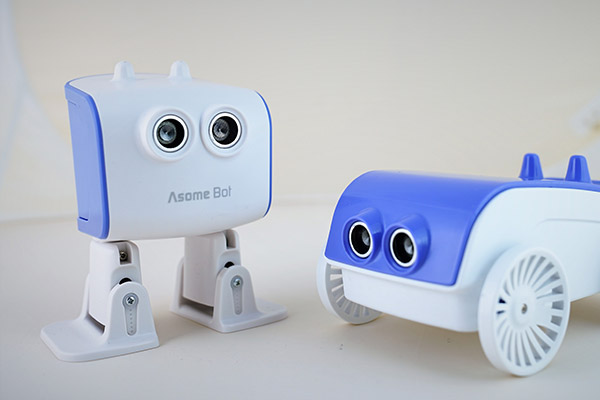 Today, we’re going to introduce you to Blue Communication, a company specializing in coding education based on physical computing. Let’s hear from company CEO Chung Hee-yong.

Blue Communication is a manufacturer of teaching materials and curriculums for software coding. It was not until I was 31 that I thought about my dream. As a father of two young sons, I found myself hoping to become a good dad. I wondered what I would be able to do using my knowledge, my personal network and the technology I had learned, and I became interested in coding education for children.

I discovered that previous teaching aids or programs were rather inconvenient to use in schools and left much to be desired in terms of developing logical thinking and problem-solving skills—the major purpose of coding education.

Founded in 2013, Blue Communication is known as its coding education brand “AsomeIT.” Having worked as a reporter, editor and director of a computer programming magazine called Microsoftware, Chung turned his eyes to coding education in the hopes of becoming a good father to his children.

Coding is basically what makes it possible to create computer software, apps and websites. It is an important means of leading the fourth industrial revolution and cultivating computational thinking, creativity and problem-solving abilities. For software coding, it is necessary to understand the principle of programming, master the programming language and combine various instructions in a logical way. But the whole process is quite difficult.

Software coding is very difficult. English commands should be combined in a proper way into an incredibly complex structure. For students, learning how to code is like studying English, math and science all at once. But considering the great benefits of coding, I hoped that students could learn coding in an easier and more interesting way.

For that purpose, I came up with “physical computing,” which is about computers interacting with more of the physical world. For example, people can better understand a software structure while watching a robot dancing or a car moving, and also feel a sense of achievement, although they may not know about software structure in theory. So we developed coding education programs featuring robots, cars and the Internet of Things or IoT-related devices to help learners master Python, which is the most widely used programming language in the world. 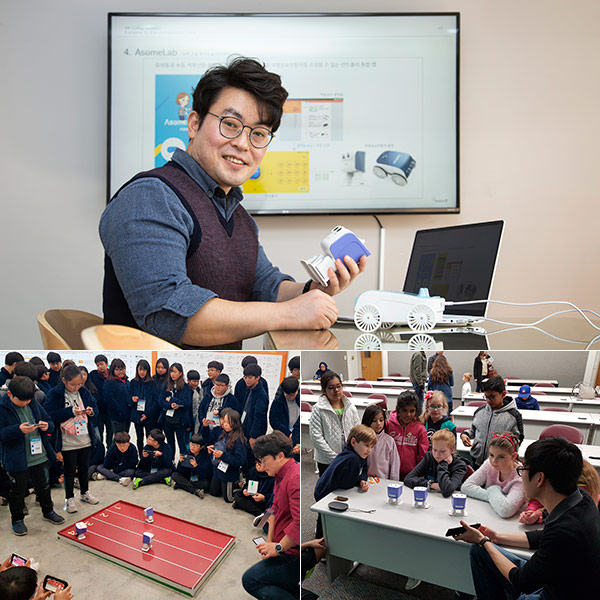 Blue Communication introduced physical computing, in which computers interact with the real world through data, in order to make the difficult and complicated process of coding simple and interesting. Using physical computing, the company created software that makes real objects move. The company’s coding education platform consists of coding tools such as AsomeBot and AsomeCar, the AsomeCode teaching program and apps connected with the tools.

Many children are fascinated by AsomeBot and AsomeCar, in particular. AsomeBot is a biped robot capable of measuring distances and avoiding obstacles using a built-in ultrasonic sensor. It can also walk, dance, wrestle and navigate a maze. AsomeCar, a four-wheeled vehicle, can race and escape from a maze by adjusting the wheel speed.

While assembling the robot and the car and making them move using code, children can naturally understand how software works. The young learners become skilled at coding in the course of touching and controlling the real-life toys. The company had to invest a great deal of time and effort in the development of the fun and immersive toy teaching aids.

We tested the coding training programs on some 4,000 students to figure out what would attract the attention of students and how they could use it without much difficulty. We also wanted teachers to get acquainted with the new teaching aids easily. In fact, many teachers found it rather challenging to teach the subject of coding because coding education was made mandatory only recently and abruptly. We hoped that students and teachers alike would access the new programs without feeling pressured. It took two long years to collect feedback from students. Of course, the process cost a lot. It was so difficult to develop the programs that I even regretted having started the project.

After three years of work, Blue Communication was able to complete the coding education platform. During the period, the company met thousands of students, trained them and received feedback. While it faced many difficulties, the company gained strength from children who seemed to enjoy moving things connected with the computer through coding, so they actively proposed new ideas. The company launched its coding education brand “AsomeIT” in 2017.

We’ve already signed sales contracts with companies in the U.S., Indonesia and Vietnam. At first, I didn’t really expect to sell our program to the U.S.

Last year, CJ invited promising Korean firms, including those who won prizes at its “Product 101 Challenge” program, to KCON, the world’s largest hallyu festival held in the U.S. Of course, the firms, including Blue Communication, were eager to find business opportunities at the massive event. But I thought it would be odd to talk about software, the fourth industrial revolution or Python on the cultural stage. We showed an exciting dance performance of our robots instead. The show proved to be successful. There, local education officials happened to see the performance and we signed an MOU with an American firm. We became confident that we could sell our products in the U.S.

After that, we carried out a series of sales projects, including the creation of a joint curriculum with the University of Texas at Dallas.

Blue Communication grabbed the attention of visitors at this year’s Consumer Electronics Show in Las Vegas for its physical computing-based coding education platform. While spurring efforts to make inroads into overseas markets, the company is also working on the development of a new teaching tool.

Our coding education programs use robots, cars and IoT devices as teaching aids. Now, we’re working on artificial intelligence or AI-based drones for coding training. With the new drones, students can learn how to code by simulating some of the drones’ functions like delivery, fire detection and crime prevention or by creating and testing new services themselves. Once the coding education drones are complete, we could make a joint curriculum with the Hanoi University of Science and Technology.

Blue Communication is creating a variety of education programs designed to encourage users to enjoy coding as an effective means of implementing creative ideas. Thanks to the company’s efforts, coding will be perceived as something fun and amusing, which children can’t wait to learn.