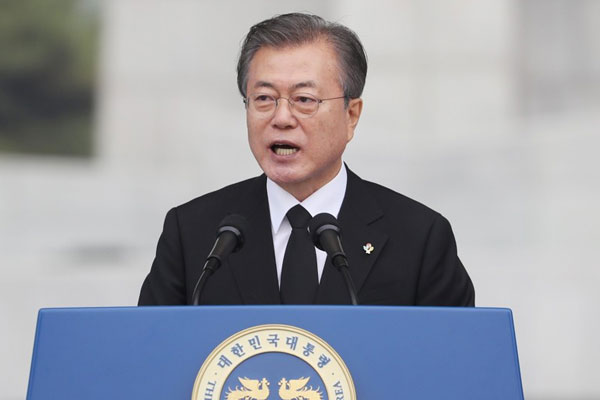 "As the vanguard of the Korean people's liberation, the Korean Volunteer Corps is seeking to get the people's attention to win liberation [against Japanese colonial occupation.]"

The voice in this audio clip from the 1940s is that of the late Kim Won-bong. In a promotional video for the Korean Volunteer Corps, he is urging Koreans to join the fight against Japan's colonial invasion of Korea.

Kim was an independence fighter who served as deputy commander of the Korean Liberation Army from 1941 to 1945. But after Korea regained its independence in 1945, the general joined the North Korean military and fought against South Korea during the Korean War.

He is now at the center of a political controversy following President Moon Jae-in’s Memorial Day speech on Thursday.

"In the last five years before Japan's surrender in 1945, the [Korean] Provisional Government achieved the coalition of the left and right in Chongqing, China and established the Korean Liberation Army."

"The strength the independence movement finally coalesced after the Korean Volunteer Corps led by Kim Won-bong was incorporated into the Korean Liberation Army... "

Moon's reference to the North Korean war hero’s contribution in his speech at was met with strong backlash from conservative camps.

"What is the president's intention? The president's remarks are nothing more than destroying the identity of the Republic of Korea and repainting history."

"By saying that only he is right and others are wrong, President Moon Jae-in's attempt to divide the public and cause conflict has crossed the line."

The conservative minor opposition Bareunmirae Party said that speaking highly of a North Korean war fighter at the graves of South Korea's fallen soldiers is an insult to the nation.

The presidential office said Moon only aimed to stress that patriotism transcends ideology and political factions. Ruling Democratic Party spokesman Lee Hae- also sought to defend the president, saying Moon spoke from a patriotic point of view and distinguished Kim Won-bong's life before and after joining the North.

The liberal Party for Democracy and Peace called for putting an end to the ideological debate, saying the issue must only belong to the realm of history.

During the Japanese colonial period, Kim mobilized a Korean nationalist underground organization in 1938 and became its leader. He went on to serve as deputy commander of the Korean Liberation Army of the Provisional Government in 1942.

Kim went to North Korea in 1948 and was decorated for his services during the Korean War by Pyongyang before being purged in 1958.

In 2005, his remaining family in South Korea asked the Seoul government to recognize his efforts for national independence. The family also requested to posthumously decorate him with a national the Ministry of Patriots and Veterans Affairs rejected the idea.