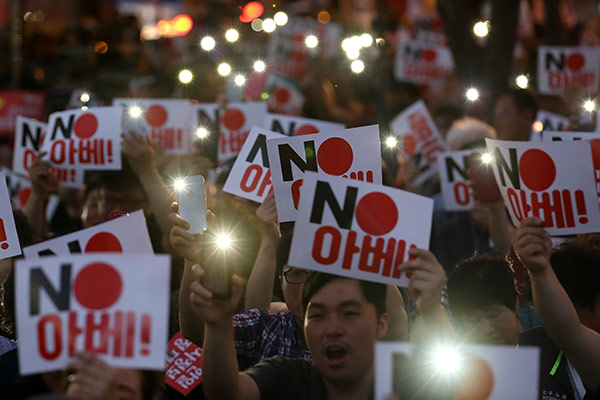 On August 28th, the Japanese government officially removed South Korea from its so-called “white list” of trusted trading partners that receive preferential treatment for export procedures. The measure is, in effect, the second round of Tokyo’s economic retaliation against Seoul, following its implementation in July of export restrictions on three materials crucial to the production of semiconductors in Korea.

In early July, Japan imposed restrictions on exports of three key materials used in semiconductors and displays, including hydrogen fluoride and photoresists. Now that Korea has lost its status as a white country, however, almost all industries, except for food and lumber, could be subject to the stringent export curbs. Japanese exporters to Korea are now required to get government approval for most shipments, including those of non-sensitive items. Those goods categorized as “non-sensitive” in Japan’s list of strategic materials include high-tech materials, electronics, computers, machinery, sensors, navigation equipment and many other items.

As many as 1,120 items designated by Japan as strategic materials are required to win an individual export approval when being shipped to Korea.

Accordingly, Japanese firms exporting those materials to Korea must get case-by-case approval from the government every six months instead of once every three years under the previous system. The screening process may take about 90 days, while it usually takes a week for countries on the white list. Even non-strategic materials that could be diverted for military use are subject to a “catch-all” system.

The problem is that the classification of strategic and non-strategic materials as well as export approval are all determined based on Japan’s own interpretations. The tougher export rules are expected to deal a blow to Korean companies that depend heavily on materials imported from Japan.

In the aftermath of Japan’s new export regulations on South Korea-bound shipments, some Korean manufacturers may suffer from decreasing profitability or return on investment due to the high-cost production structure. For them, it is urgent to replace the existing supply chain with another one to find alternative sources that substitute Japanese imports. It is a costly process, though.

The expanded export curbs on high-tech chemical materials and machine tools will damage Korea’s major industries such as semiconductors, batteries and automobiles.

The Korea Economic Research Institute recently conducted a survey on the country’s top 1,000 companies by sales. On average, respondents predicted that Japan’s export restrictions would result in a two-point-eight percent fall in their sales and a one-point-nine percent decline in their operating profits.

Korea relies heavily on Japan for imports of precision tools used to produce parts for automobiles and ships and carbon fiber needed to manufacture hydrogen tanks for fuel-cell vehicles and high-tech materials. If Korea has difficulty in importing those materials from Japan, production will inevitably face a setback.

Industry experts are paying attention to whether Japan will impose additional regulations.

Japan may retaliate against South Korea in economic and security areas. Following Korea’s decision not to renew the General Security of Military Information Agreement with Japan, Tokyo may classify South Korea as a country it could wage war with. Japan may escalate tension further through military drills around South Korea’s easternmost islets of Dokdo.

On the economic front, Japan could expand the targets of its export control to more materials or increase tariffs on Korean goods, just as U.S. President Donald Trump has done to Chinese imports. Japan may also complicate remittance procedures to discourage companies in Korea and Japan from trading or strengthen visa issuance standards to reduce people-to-people exchanges. Japan may consider these additional retaliatory measures.

Japan may take these additional measures if bilateral relations worsen. After taking off Korea from its preferential “white list”, the Tokyo government is expected to adjust the level of retaliation, while monitoring how Seoul will respond.

To cope with the situation, the Korean government is seeking to achieve technological independence. It is paying closer attention to 159 items, which are expected to be directly affected by the trade restrictions. It will also spend more than five trillion won or about four billion U.S. dollars in nurturing local parts and materials industries for three years starting in 2020. Through these countermeasures, Korea is hoping that it can turn misfortune into something positive.

In the mid-to long-term, Korea needs to build the supply chain domestically and diversify import destinations, other than Japan, so it can reduce its trade dependence on one particular country. At present, the manufacturing industry is most vulnerable to Japan’s export curbs.

But an improvement in its structure will strengthen the fundamentals of the Korean economy. The fallout from Japan’s trade restrictions will affect both Korea and Japan negatively in the short term. But in the longer term, the crisis could turn into an opportunity for Korea, especially when it spurs the local production of parts, materials and equipment.

The government’s measures may not be able to resolve the current problems right now. But if South Korea manages to reduce its reliance on imports of Japanese materials and parts and sharpen its own competitiveness in these areas, it will be an opportunity for the local manufacturing industry to take a big leap forward.

Japan’s export control will disrupt production in Korean industries and also reduce Japan’s own exports to Korea for the time being. The number of visitors to each country will decrease as well. I think Japan will be hit harder than Korea because the former has enjoyed a trade surplus with the latter for decades. A shrinking trade surplus with Korea may bring about a crisis in Japan, and Japanese firms will lose a major export market.

As a matter of fact, the Japanese economy is in a more difficult situation than the Korean one. After the “two lost decades,” Japan may suffer another decade of recession. While industry watchers here say that the growth rate of the Korean economy will remain in the two percent range, Japan is concerned about negative growth. A trade conflict with Korea will only add uncertainties to the already struggling Japanese economy.

The Korean government is preparing for various scenarios to brace for the possibility of Japan’s protracted export restrictions.

At the same time, Seoul has expressed its strong commitment to dialogue with Tokyo.

The longer the restrictions last, the greater the damage. Dialogue will certainly be the best way to settle the dispute. Both sides should make efforts to normalize their ties.