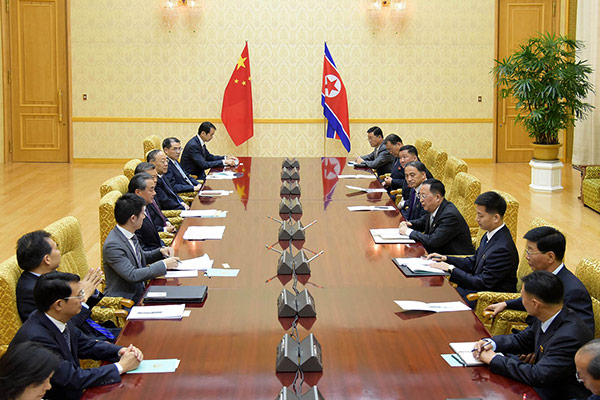 Amid the protracted stalemate in dialogue between North Korea and the U.S., Chinese State Councilor and Foreign Minister Wang Yi visited North Korea from Monday to Wednesday, at the invitation of his North Korean counterpart Ri Yong-ho. Here is Professor Chung Dae-jin from the Institute of Unification at Ajou University to discuss the implications of the top Chinese diplomat’s trip to Pyongyang and its potential influence on North Korea-U.S. dialogue and the security conditions on the Korean Peninsula.

North Korea and China will mark the 70th anniversary of the establishment of their diplomatic ties on October 6th. With various commemorative events expected to take place in both countries, Chinese Foreign Minister Wang Yi traveled to Pyongyang early this week. Amid speculation that North Korea and the U.S. are preparing for working-level denuclearization negotiations, the Chinese foreign minister probably wanted to figure out exactly what the North and the U.S. are discussing and how they are fine-tuning their different views and strategies. I imagine that’s the purpose of Wang’s recent visit to North Korea.

During his three day stay in Pyongyang, Wang highlighted the friendly ties between North Korea and China and discussed various pending issues including the resumption of North Korea-U.S. talks and Pyongyang’s denuclearization. During a meeting with Wang at the Mansudae Assembly Hall in Pyongyang on Monday, North Korean Foreign Minister Ri Yong-ho called for the need to open a new era of stronger bilateral ties and cooperation, and proposed to advance their relations even further by celebrating the 70th anniversary of diplomatic ties in a big way. In the run-up to the significant occasion, Wang’s official visit seems to have contributed to strengthening bilateral cooperation between Beijing and Pyongyang.

On the economic front, North Korea relies heavily on China for trade, with Beijing accounting for over 90 percent of Pyongyang’s external trade. If Wang’s visit to Pyongyang this week is followed by North Korean leader Kim Jong-un’s trip to China next month, the two countries will be able to cement their close relations in a wide range of areas such as the military, the economy and diplomacy in the remaining months of the year.

North Korea and China have conducted brisk bilateral exchanges in commemoration of the 70th anniversary of their diplomatic ties. A North Korean economic delegation led by the Minister for External Economic Affairs Kim Yong-jae attended a forum in the Chinese city of Changchun in late August and discussed ways to promote economic cooperation between the two countries. Earlier, on August 16th, a North Korean military delegation that included the Director of the General Political Bureau of the Korean People’s Army Kim Su-gil visited China to agree on the need to boost bilateral military collaboration.

Beijing and Pyongyang are obviously demonstrating their close relationship on the occasion of the 70th anniversary of their diplomatic ties, but there are more reasons why the two countries are getting closer.

As we recall, Chinese President Xi Jinping did not meet North Korean leader Kim Jong-un until Kim showed his commitment to denuclearization and got ready for his summit with U.S. President Donald Trump. Until then, North Korea-China relations had been rather cold. The China-North Korea summit took place only after the North signaled its willingness to denuclearize itself last year.

Beijing, for its part, finds it necessary to use Pyongyang to curb Washington’s influence in their fierce battle over trade and global supremacy.

As North Korea has been stepping up its offensive against South Korea and the U.S. lately, tension has been drawn out in denuclearization negotiations. North Korea’s invitation of the Chinese foreign minister at this point in time is interpreted as its intention to use Beijing as leverage to find a breakthrough in the deadlocked dialogue with Washington. Amid the ever-intensifying trade row between China and the U.S., Beijing, for its part, seems to be seeking to ease its conflict with Washington by acting as a mediator between the North and the U.S.

There seems to be a high possibility of Kim visiting China. If the North Korean leader meets the Chinese president once again on the occasion of the 70th anniversary of the establishment of diplomatic relations, Pyongyang can demonstrate its intimate and friendly ties with Beijing to the U.S. ahead of their potential negotiations. Domestically, Kim can show to his people that he can meet the Chinese president anytime he wants and that leaders of countries around the world are willing to meet him. In order to seize this great opportunity, Kim is likely to visit China around October 6th.

If the past is any guide, the Chinese foreign ministers’ two-day trip to Pyongyang in May of last year led to the North Korean leader’s second and third visit to China. Amid the growing possibility of Kim visiting China next month, the nuclear negotiations between North Korea and the U.S. are also expected to enter a new phase.

The key is how extensively North Korea can and will meet the denuclearization level required by China and the U.S. Once North Korea and China agree on that level during their summit, the North will show its negotiation card to the U.S.

While China and the U.S. see eye to eye on North Korea’s denuclearization in a broad context, they still have differing views on the details. They need to coordinate the pace, direction and the method of denuclearization, and it may take some time to do so.

If North Korean leader Kim Jong-un visits China and meets his Chinese counterpart Xi Jinping, following the Chinese foreign minister’s visit to Pyongyang this week, North Korea-U.S. negotiations may resume. The leaders of Pyongyang and Washington may even meet for another summit within the year to find a breakthrough in denuclearization talks.

However, if China plays a greater role in dealing with Korean Peninsula issues, North Korea-U.S. dialogue may be further delayed. For now, it is hard to predict what lies ahead for regional diplomacy. But one thing is for sure, the Chinese foreign minister’s latest visit to North Korea is a watershed for future nuclear negotiations between Pyongyang and Washington.