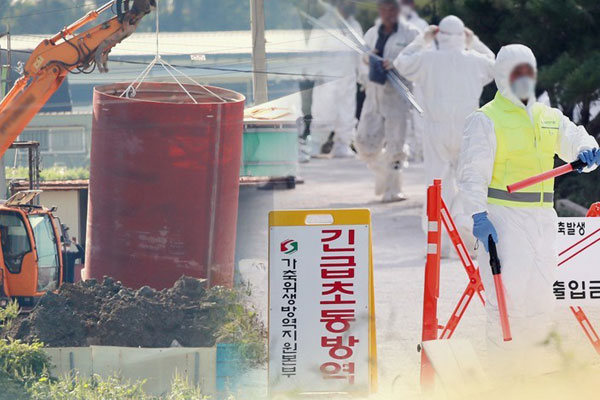 In an effort to contain the spreading African Swine Fever, the government has decided to buy or cull all pigs in areas around Paju and Gimpo in amid continued confirmations.

The Ministry of Agriculture, Food and Rural Affairs said on Thursday that after consulting with the local governments of Paju and Gimpo, it has decided to cull pigs from all farms, including those outside a three-kilometer radius of farms that reported ASF cases.

The ministry will first purchase pigs in the region that cleared ASF tests and allow their shipment to slaughterhouses, while culling the remainder as a precautionary measure. However, pigs within a three-kilometer radius of farms that reported ASF cases are not subject to the state procurement plan.

For Yeoncheon county in Gyeonggi Province, the ministry will also take similar steps for pig farms within a ten kilometer radius of farms with confirmed ASF cases.

Aside from pigs at farms, South Korea’s military has instituted a shoot-on-sight policy for wild boars coming from North Korea amid concerns over the contagious animal disease.

According to a military official on Friday, it sent an order to general outposts(GOPs) at the inter-Korean border to immediately fire on wild boars found crossing through the demilitarized zone(DMZ) to South Korea.

The order follows the discovery of a wild boar carcass infected with ASF in the DMZ near Yeoncheon, Gyeonggi Province. The official added that the military notified North Korea of the plan to prevent any unintended friction at the border.

The military has said that although it is unlikely that wild boars pass through the heavily fortified DMZ into South Korea, there is a possibility that small landslides following typhoons or heavy rains may create entry points for the boars.

In addition to the shoot-on-sight order, South Korea’s defense ministry also deployed a helicopter to an inter-Korean border area as part of quarantine efforts against African swine fever(ASF).

Dispatched from around 3:30 p.m. on Friday, the chopper will spray disinfectants for around a week-long period over the Demilitarized Zone near Yeoncheon County in Gyeonggi Province.

The ministry said it coordinated the helicopter’s deployment with the UN Command and also informed Pyongyang of the related plan.