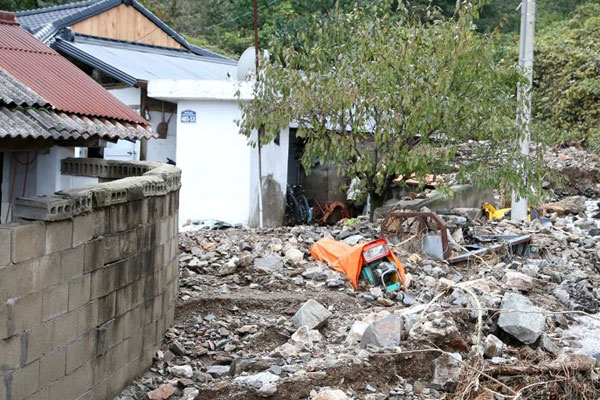 At least 12 people have died after the 18th typhoon of the year, Mitag, swept across the country earlier in the week.

Due to strong winds and heavy rain, over 600 flights in Jeju and Gimhae airport were cancelled and some 500 trails in 21 national parks were closed down.

The Central Disaster and Safety Countermeasures Headquarters said that as of 6 am Saturday the typhoon left twelve people dead, eleven injured and three missing across the nation.

Some were found dead after being swept away by flash floods, while others were inside residences that collapsed due to landslides.

About 36-hundred damage reports were filed with authorities involving both private and public . More than 12-hundred homes, 135 factories and commercial buildings and farmland at over 18-hundred locations were destroyed or flooded.

Over one thousand people have been dislocated from their homes.

To help out victims of the typhoon, a number of public and private corporations, including financial institutions, automobile companies, and F&B companies, have offered support funds and special purchasing discounts or benefits.