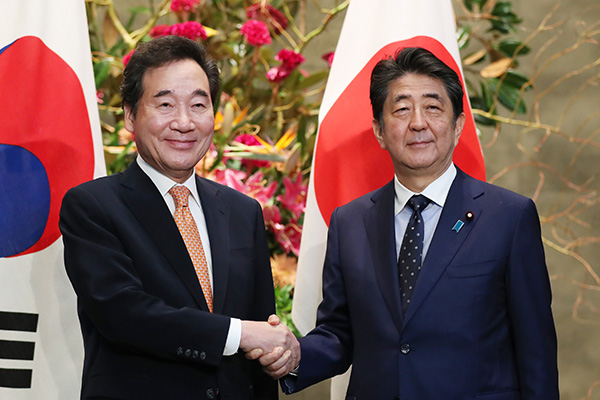 It’s been over 100 days since Japan enforced export restrictions on South Korea. While the drastic export curbs have not dealt a serious blow to Korea so far, tension still lingers between the two neighboring countries. Against this backdrop, attention is turning to whether the recent meeting between South Korean Prime Minister Lee Nak-yon and Japanese Prime Minister Shinzo Abe in Tokyo will pave the way for Seoul and Tokyo to ease their economic conflict. Here is Professor Kim Gwang-seok from Hanyang University’s Graduate School of International Studies with more.

The meeting itself was greatly significant as it signaled an exit from the extremely strained relations between Japan and South Korea. Japan may have thought that a drawn-out trade dispute with Korea would not serve its own interests since its economy is currently in bad shape. The trade conflict may last for some time, but it is unlikely to further intensify.

It was the highest-level meeting between officials of the two countries since South Korea’s Supreme Court ruled in favor of Korean victims of Japan’s wartime forced labor in October of last year.

It was initially described as a “face-to-face talk” but then changed to a “meeting” by Japan. During the meeting that was originally scheduled to last 10 minutes, but stretched to 21, Abe and Lee shared their views on the importance of dialogue and cooperation. However, Abe repeated his government’s previous position that South Korea should keep its promise with Japan, signaling that the two countries still held differing views.

Nevertheless, the two sides are believed to have sparked momentum to jumpstart dialogue that has been stalled since Japan’s export curbs were implemented in July.

Bilateral relations froze quickly after Japan imposed export curbs on three key materials needed to produce semiconductors, Korea’s top export product, in July---a move widely seen as economic retaliation against Seoul. Korea sent a high-level special envoy to Japan as part of efforts to resolve the conflict in a proper way. But Japan went as far as to officially remove South Korea from its white list of trusted trading partners on August 28th. Earlier, South Korea announced that it would not renew a military intelligence-sharing pact with Japan, known as the General Security of Military Information Agreement. Inevitably, tension reached its peak and the bilateral ties reached their lowest point.

The diplomatic conflict between Seoul and Tokyo spilled over to the economic front, resulting in a trade feud, which placed a heavy burden on Korean companies.

Japan’s export restrictions on Korea have dampened business sentiment in the country, causing Korean companies to refrain from new investment. The Korean government is preparing measures to cope with Japan’s export curbs on key materials for Korea’s chip and display industries. The government has designated 159 industrial materials as being subject to special supervision and will help companies replace imports from Japan with alternatives from local or foreign suppliers. The government plans to provide state support for firms that may see rising costs in the process. It is making constant efforts to reduce the factors that might disrupt the supply chain.

According to the Ministry of Trade, Industry and Energy on October 9th, Japan has approved only seven shipments of industrial materials that are under restrictions to Korea since July. Korean firms moved fast to locally produce parts and materials, for which they had depended heavily on Japan. The government also said that it would spend more than 1.8 billion US dollars each year in supporting the local production of parts, materials and equipment. Ironically, Japan’s export regulations are prompting Korea to produce key industrial materials and parts through localized supply chains.

Still, there are concerns over possible production disruptions if the inventory dries up. In addition, the Japanese economy has also been hit by economic measures from Korea.

Japan’s “lost 20 years” are feared to expand to a “lost 30 years.” The International Monetary Fund said in its October report that the Japanese economy would grow 0.5 percent in 2020, indicating that the country’s current economic woes may continue through next year. Following Japan’s economic retaliation against Korea, Korean citizens have stopped buying Japanese products and refrained from taking trips to Japan. To make matters worse, Korean companies that had imported large amounts of materials from Japan are now looking for alternatives or seeking to produce them locally.

As a result, Japan has had difficulty in finding a big buyer like Korea, with its exports to the country shrinking in recent months.

Japan’s exports to South Korea fell 10.8 percent in the third quarter of this year, compared to the same period last year. It represented a sharper decline than the 4.2 percent decrease in Korea’s shipments to Japan in the same period. Amid the ongoing boycott of Japanese goods in South Korea, Japan has seen the decrease in its monthly exports to Korea expand in the last two months, while its trade surplus plunged 25.5 percent.

As Japan’s export restrictions have inflicted damage on both Korea and Japan, attention now swings to how their relations will evolve after their prime ministers’ meeting last week.

I imagine Japan will request Korea not to terminate their military information-sharing agreement. It may also suggest that the two countries ease tension over historical and political issues. South Korea, for its part, could demand that Japan retract its decision to exclude Korea from the list of “white countries” and withdraw its export control. The two countries will likely coordinate their views on those issues little by little to find a compromise. Of course, it will be difficult for the two sides to reach an agreement anytime soon, as their bitter, decades-long conflict will not be resolved overnight. Still, the conflict is unlikely to deteriorate further.

The economic conflict between Seoul and Tokyo can hardly be eased through one short meeting.

Still, it is a relief that the two countries have confirmed each other’s commitment to dialogue.