"Kill the Laziness" by Koo Kyung-mi 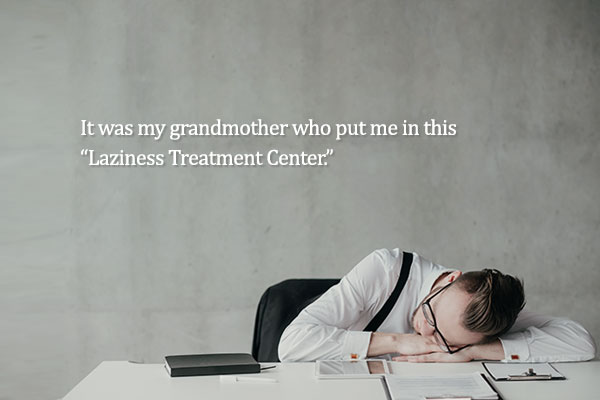 It was my grandmother who put me in this “Laziness Treatment Center.”

The narrator is a 26-year-old woman looking for a job. To her grandmother, a strong woman who has supported the family by running a tripe restaurant all her life, her granddaughter seemed simply a patient suffering from laziness disease.

The main character did not choose to be lazy but was forced to. She is doing her best to find a job, but realistically it’s not that easy. The problem is that rather than blaming the youth unemployment problem on social structure, grownups are accusing the young jobless people of not trying hard enough. In order to emphasize the cold reality of today’s job market, laziness is seen as a disease that needs to be treated at the center.

To be more exact, I was being admitted to a camp, not a clinic.

Although Grandma insisted that laziness was a disease, it was, in fact, closer to a habit or a feeling of indifference.

The head of this place was not a president, but a principal, and its employees were called teachers, not nurses. They called us students.

But then why is this place called a treatment center rather than a school or a training camp?

Perhaps the name was meant to demonstrate the center’s strong commitment to cure students. Or they could have chosen that name intentionally for people like my grandmother who believed that laziness was a disease.

: Debuted by publishing “Staying at Dongbaek Inn” in Kyunghyang Shinmun in 1999