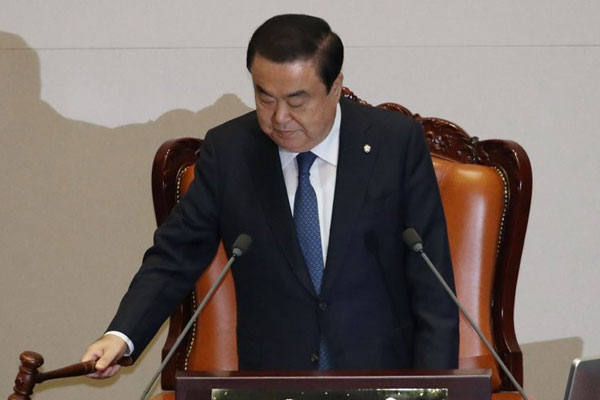 Four fast-tracked bills related to criminal justice reform will be added to the calendar for consideration at a National Assembly plenary session on December third.

The decision gives rival parties time to discuss the proposed legislation, which includes the establishment of an independent investigative unit to uncover corruption among high-ranking government officials and expanding police investigative authority.

The bills were placed on the fast track on April 29 jointly by the ruling Democratic Party(DP) and other parties over objections from the main opposition Liberty Korea Party(LKP).

The legislation was expected to be referred to the plenary session on Tuesday under National Assembly law, potentially escalating tensions between rival parties. Speaker Moon, however, exercised a legal clause to delay the referral.

Han explained that the decision is aimed at encouraging a deal between rival parties. The DP, however, said the decision was very regrettable, while the LKP, which maintains that the bills’ fast-tracking was illegal, said it cannot accept the December third timeline.

If the December third timeline comes to fruition, the bills are expected to be processed and voted on quickly, potentially paving the way for the Moon Jae-in administration to realize some of its key reform proposals.