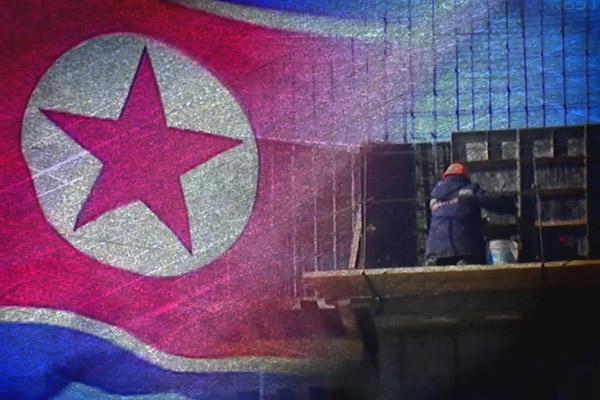 The North Korean Human Rights International Film Festival was held in Seoul from November 1st to 3rd to call attention to the human rights and social issues in North Korea. The opening film was a documentary entitled “Dollar Heroes,” a rare flick that describes how North Korean laborers dispatched overseas earn foreign currency.

North Korea began to send workers to the Soviet Union back in 1948 during the reign of Kim Il-sung.

In the early 1990s, more than 20-thousand North Korean lumberjacks were sent to Russia. From then on, more and more North Korean laborers have been dispatched overseas as a major source of hard currency for the regime.

The North sent numerous workers to the Soviet Union, in particular, in return for a large amount of assistance from its traditional ally.

Starting with the 15-thousand loggers sent to the Soviet Union in 1967, North Korea dispatched workers to Africa for free in the 1970s when it built a presidential palace in Madagascar and a parliamentary building in the Central African Republic. At the time, North Korea formed a political alliance with African countries that felt hostility against the U.S. by constructing buildings in their countries free of charge.

This political purpose changed to an economic one during the years of Kim Il-sung’s son and successor Kim Jong-il. North Korea earned hard currency by sending workers to 45 different countries other than its traditional allies like China and Russia, with their working areas expanding from logging and construction to food service, fishing, needlework, hospitality, information technology and medical treatment. Even more workers have been sent abroad since Kim Jong-un assumed power.

There was a limit as to what North Korea could do to revive its tattered domestic economy and it was almost impossible to draw foreign investment due to U.N. Security Council sanctions. The Kim Jong-un regime had to find a way out of the economic hardship, as it needed to secure governing funds.

The country found a breakthrough in its workers that were sent overseas, as it was relatively easy to bring in foreign currency through them. North Korea has sent many laborers to China and Russia, where it can manage its workers well.

North Korea has dispatched more and more workers abroad because international sanctions make it difficult for the country to earn foreign currency through normal economic exchanges. The domestic situations in China and Russia have also contributed to a rise in the number of North Korean workers in those countries.

China has been looking for ways to cope with sharply rising labor costs in line with its economic development, while Russia is grappling with labor shortages, especially in industries that require hard physical labor. At present, it is estimated that 50-thousand to 120-thousand North Korean laborers are working in some 50 countries around the world. This important project of sending workers overseas is managed by the state.

Of course, not everyone can work overseas even if they want to. Relevant agencies like the Ministry of Forestry, the Ministry of Foreign Trade, the Workers’ Party and the military selects candidates behind closed doors and thoroughly reviews their applications.  The candidates must have a surety who should be jointly responsible for any problem they may cause overseas. The selected candidates must go through three or four rounds of interviews for ideological verification and receive a physical examination. After passing all the procedures, they are approved by the central party. Most of the workers are sent abroad as members of the party. Their families are left behind in the North, where they are essentially held as hostages.

North Koreans are sent abroad as soldiers or civilians who belong to enterprises or social groups. Companies in the North provide its workers to their branches in foreign countries.

To be sent overseas, one should be a member of the Workers’ Party and have no relatives or acquaintances in other countries. In addition to the document review, interviews and a physical checkup, the state also examines the history of the worker’s family and relatives—all the way to third cousins. In the case of married people, the history of their spouses’ family is inspected as well.

Despite such a rigorous screening process, many North Koreans hope to work in other countries because they can earn more money overseas than in their home country. Some even attempt to bribe officials. While they may earn a lot of money overseas, they cannot keep it all for themselves.

North Korean laborers earn an average of 100 to 1,500 US dollars a month. But 70 to 90 percent of their earnings go to the state in the name of “loyalty payments.” Workers only get 10 to 30 percent of what they actually earn. In some cases, they are given a scrap of paper indicating that amount and do not receive real money. When they send the money to their families in North Korea, the state receives it first. A year later, it gives the money to the families in dribs and drabs, not all at once. The so-called “loyalty funds” flow into the party’s office or Room 39, which is in charge of managing foreign currency earnings that are used for the leader’s private coffers.

North Korea is estimated to earn 200 million US dollars annually by sending its workers overseas. The authorities take 70 to 90 percent of the laborers’ earnings and use the money to develop missiles and nuclear weapons or purchase luxury goods for the leadership, including leader Kim Jong-un.

Another serious problem is the mistreatment of the North’s workers as well as the infringement of their human rights. They work 10 to 12 hours a day and 27 days a month. Many often get injured or even die due to heavy workloads. Even on their days off, the workers are forced to stay in their accommodations or workplace and are not allowed to go anywhere since their passports are kept by the authorities.

Shocked by the dire human rights situation of North Korean workers overseas, the international community is moving to stop receiving laborers from Pyongyang. In December of 2017, the U.N. Security Council adopted Resolution 2397 that required U.N. members to send North Korean laborers working in their countries back home by the end of this year.

Radio Free Asia examined reports submitted by 35 countries to the U.N. Security Council in July this year, six months before the repatriation is supposed to end.

According to the reports, a total of 23,171 North Korean laborers had been sent back to the North. Among the 35 countries, only eight nations including Russia and Indonesia had specified detailed figures in their reports. Russia, for example, said that out of the 30,023 North Korean workers in Russia, it had repatriated 18,533 to the North.

While many countries are repatriating North Korean workers, Pyongyang still sends laborers abroad. There are reports that the North has recently sent thousands of workers to factories in China. The workers entered China without a visa, as no new work visas could be issued to North Koreans who wanted to work overseas under the U.N. sanctions.

The North’s workers have been exploited as a means of earning foreign currency for the communist regime. It seems urgent to find ways to reclaim their freedom and human rights.

(Next week, we’ll talk about street food in North Korea.)