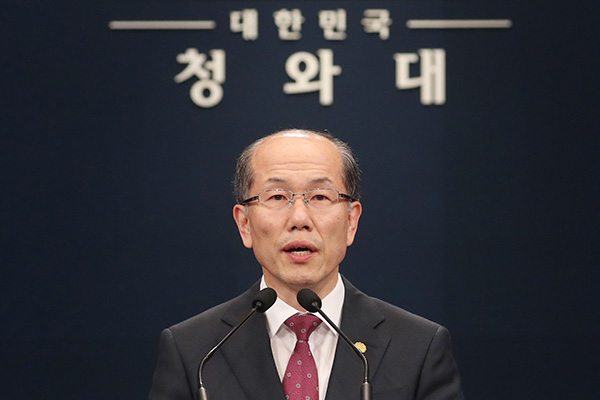 The South Korean government decided last week to conditionally extend its intelligence-sharing pact with Japan, known as the General Security of Military Information Agreement or GSOMIA. But the conflict between Korea and Japan still continues over whether the Tokyo government announced the decision in a distorted way. Today, we’ll discuss the ongoing tension between Seoul and Tokyo with Professor Chung Han-beom from the Korea National Defense University.

GSOMIA is automatically renewed every year unless one country notifies the other of its decision to terminate the deal 90 days in advance. South Korea announced its decision on August 22nd to end the pact after Japan’s export curbs, calling for Tokyo to cancel the measures against Korea. In line with the decision, the bilateral military pact was set to expire at midnight on November 23rd.

Fortunately, Japan changed its attitude and expressed its intention to discuss the export restriction measures. Accordingly, Korea decided to temporarily put off the expiration of the agreement. It means the suspension of the GSOMIA termination is only conditional and tentative, and the decision can be reversed at any time.

South Korea’s last-minute decision to suspend the termination of GSOMIA came just six hours before the deadline. But Korea set preconditions that it could end the agreement at any time. Although it is a temporary extension, it is a relief that South Korea and Japan managed to patch things up. Both sides are believed to have taken a step back, respecting the principle of solving the problem through dialogue. Analysts say that Washington’s pressure and mediating role may have played a part in the decision.

The U.S. wielded great influence upon the GSOMIA signing between South Korea and Japan in 2016. In fact, the South Korean public was strongly opposed to signing a military intelligence sharing deal with Japan, the former colonizer who hasn’t shown the slightest bit of remorse over its wartime atrocities. But in 2012, the U.S. requested South Korea to sign GSOMIA with Japan in a bid to contain North Korea’s nuclear threats and keep the emerging power of China in check. Seoul finally signed the pact with Tokyo in November of 2016. Not surprisingly, the U.S. was against South Korea’s move to stop exchanges of intelligence with Japan under GSOMIA.

The U.S. regards GSOMIA as an important tool to strengthen its security cooperation with South Korea and Japan, since it believes trilateral cooperation is crucial to support its Indo-Pacific Strategy. When the Korean government announced in August that it would not renew GSOMIA, Washington expressed its concern and disappointment and pressured Seoul to extend it.

Taking things into consideration, South Korea chose to keep GSOMIA on a conditional basis. It seems that the worst is over, but Seoul and Tokyo are still wrangling over who is telling the truth about the conditional extension.

Japan imposed export restrictions on South Korea and removed Korea from the so-called white list of preferred trading partners, citing a breach of trust on the grounds of national security. So, for South Korea, the measures are not just economic, but are directly related to its alliance with Japan. Seoul decided in August to end GSOMIA, in the belief that it is not right for countries that do not have military trust in each other to sign an information sharing agreement.

After World War II, Japanese militarists were not purged but instead formed conservative political groups. Even today, hard-line nationalists, in a bid to maintain their power, continue to churn out ultra-right wing comments and hawkish remarks, which are unfortunately directed at South Korea. When it comes to the GSOMIA issue, it was the Japanese government that suggested behind-the-scenes talks with Seoul, as it wished to renew the bilateral deal. But it doesn’t want the public to know this. Japan’s announcement about GSOMIA is pretty much aimed at domestic politics. That’s why Japan offered an apology to South Korea but denied it later when speaking to its people.

In a press briefing about the GSOMIA extension announcement, Japan’s Ministry of Economy, Trade and Industry said that South Korea had admitted to its problems in trade management.

The South Korean presidential office lodged a strong complaint regarding these distorted facts. The Tokyo government then offered an apology for the exaggerated announcement by its ministry. But on November 26th, Japanese Foreign Minister Toshimitsu Motegi said that Tokyo had never apologized. The Japanese government’s dishonest attitude reflects that it is well aware of the public support for its hard-line stance against South Korea and hopes for the complete renewal of GSOMIA.

But a wasteful “truth game” like this will only make future negotiations even more difficult.

At first, South Korea made a firm decision to end GSOMIA. But it later decided to temporarily put off the expiration, all because of a change in Japan’s attitude. But now, Tokyo continues to betray Seoul’s trust, making South Korea skeptical about Japan’s sincerity at future negotiations. As I said before, Korea has decided to extend the pact only for the time being. Even now, Japan must show a more sincere attitude when negotiating with South Korea.

The two sides have many problems to contend with, including Japan’s export curbs. In the hopes of resolving their issues through top-down diplomacy, Seoul and Tokyo plan on scheduling a bilateral summit on the sidelines of a trilateral summit involving South Korea, Japan and China, which will be held in Chengdu next month.

I guess South Korea and Japan will try to fine-tune their differing views before the summit, since it should produce some positive results. But if Japanese Prime Minister Shinzo Abe continues to stick to his right-wing policies to solidify his base in domestic politics and takes issue with the Korean top court’s ruling on forced labor victims, it will be difficult to resolve the export restriction issue.

Last year, the Korean Supreme Court ordered Japanese companies to compensate Korean victims of wartime forced labor. If Korea and Japan seek to address the problem without consent from the victims, the move will draw strong backlash. So, this isn’t an easy problem. The key is whether Japan will agree to link export restrictions only with GSOMIA or insist on including the forced labor issue as well.

The two countries will start discussing the issue of export curbs as early as this week, while diplomatic authorities also plan to discuss major pending issues before the South Korea-Japan summit. But it seems that the two neighboring countries still have a long way to go before normalizing ties.