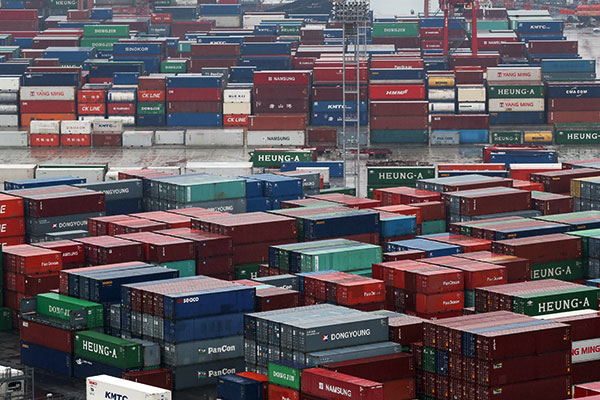 South Korea’s exports have struggled throughout this year due to multiple roadblocks including the ongoing trade war between the U.S. and China, weak semiconductor sales and Japan’s export restrictions on Korea. Still, South Korea is expected to achieve more than one trillion US dollars in trade, the sum of exports and imports of goods and services, for three consecutive years. Here is Kim Dae-ho, director of the Global Economic Research Institute with more.

Korea has seen both exports and imports decrease this year. Exports fell 10.2 percent from last year to post a two digit decline. But the country still recorded a trade surplus, meaning that its exports exceeded imports. During the Asian financial crisis 20 years ago, the situation was the other way around, leading to a shortage of foreign exchange reserves and a major economic crisis. But now, Korea enjoys a trade surplus, although it has narrowed a bit.

Korea’s exports have fallen for 12 straight months since December of last year, the longest since the 19-month losing streak from January of 2015 to July of 2016.

This represents the first contraction in exports since 2016 and the first double digit drop in a decade. Mr. Kim explains why Korea has struggled with declining exports this year.

Most of all, the unit price of semiconductors, Korea’s major export product, has been falling. While the amount of exported semiconductors increased this year, the worth of exports has actually decreased due to a plunge in chip prices. Semiconductor prices tend to fluctuate violently because of the sensitive business environment. They remained at the lowest level from late 2018 to the first half of this year, due partly to a massive increase in China’s semiconductor facilities. Fortunately, the situation is showing signs of a turnaround.

Another negative factor is the U.S.-China trade war, which has dealt a serious blow to Korea. I’m reminded of a proverb, “An innocent bystander gets hurt in a fight.” But this is inevitable, since Korea has relied too heavily on the U.S. and China for trade. It comes as no surprise that shrinking trade between the world’s two largest economies as a result of their trade dispute has also cut Korea’s exports to both the U.S. and China. For these reasons, Korea’s outbound shipments overall have tumbled this year.

South Korea is not the only country that has grappled with sluggish exports. The trade conflict between the U.S. and China has continued throughout the year, and all top ten exporters in the world, except for China have seen their overseas sales dwindle. But Korea has been hit even harder, as it is directly exposed to the fallout of the U.S.-China trade war due to its high dependence on these two major economies.

The lackluster semiconductor business has also contributed to a drop in Korea’s exports.

Prices of DRAM chips have plummeted a whopping 49 percent during the past year, hurting local chipmakers’ profitability.

On a positive note, however, Korea is expected to surpass one trillion dollars in trade for the third consecutive year.

Exceeding one trillion dollars in trade is a remarkable achievement, indeed, given the slowing global economy. Korea’s exports to China, in particular, fell drastically last year. China imports many intermediate goods from South Korea for its own exports to the U.S. The decline in trade volume between the U.S. and China amid their trade row inevitably reduced Korea’s exports to China. South Korea engaged in its own trade dispute with Japan this year. The trade friction started in July when Japan imposed restrictions on its exports of key industrial materials to Korea.

Despite the harsh external trade environment, Korea is expected to record a trade value of over one trillion dollars this year, indicating that the economy is strong enough to withstand these difficulties.

This year, the global trade environment was thrown into turmoil, as seen with the U.S.-China trade dispute, the weakening global economy and growing uncertainties about a no-deal Brexit. To make matters worse, Japan placed export curbs on three key industrial materials to Korea and removed it from its so-called white list of trusted trading partners.

However, South Korea has weathered the challenges so far to maintain its position as a strong player in trade. It is worth mentioning that Korea’s exports to Southeast Asian countries have increased this year to the point of accounting for more than 20 percent of its total outbound shipments. It would be fair to say that the country has successfully diversified its export markets. Encouraged by these positive developments, many analysts are expecting a rebound in exports.

The government predicts that Korea’s exports will bottom out this year and turn positive in 2020. Of course, the base effect from this year’s sinking exports may play some part in this. But semiconductor prices are rising and memory chip sales are increasing as well. Therefore, semiconductor exports are expected to grow fast from March of next year. South Korea has also received an increasing number of global shipbuilding orders, while its overseas sales of automobiles and petrochemical products are picking up.

The Korea International Trade Association has forecast that the nation’s exports will amount to 561 billion dollars next year, up 3.3 percent from this year while imports will increase 3.2 percent on-year to reach 522 billion dollars, with the total trade volume in 2020 estimated to post one trillion and 83 billion dollars. The projection is based on the expected rise in demand for fifth-generation or 5G equipment, the recovery in semiconductor unit prices, the diversification of export destinations and the anticipated increase in the exports of items from new industries. Of course, some risk factors still remain.

The most disturbing part is auto exports. U.S. President Donald Trump is trying to find out whether imported automobiles from Japan, the European Union and South Korea may threaten the national security of the U.S., under Section 232 of the Trade Expansion Act.

The U.S. is moving ahead with its plan to slap tariffs on imported cars. I don’t think South Korea is subject to such tariffs, given the recent renegotiations of the Korea-U.S. trade agreement. Still, Trump has shown such a strong commitment to protecting the domestic auto market, and we’ll have to keep an eye on this area throughout next year.

The U.S. has yet to decide whether to execute the plan to impose 25 percent tariffs on cars and car parts imported from Japan, the EU and South Korea. But for Korea, this issue is like a time bomb that could explode at any time.

South Korea should be wary of lingering uncertainties like the U.S.-China trade conflict and trade protectionism around the globe. But if Korea continues to explore more export markets and overcome various hurdles next year, as it has done this year, its exports will certainly serve as a major engine to propel its economy.