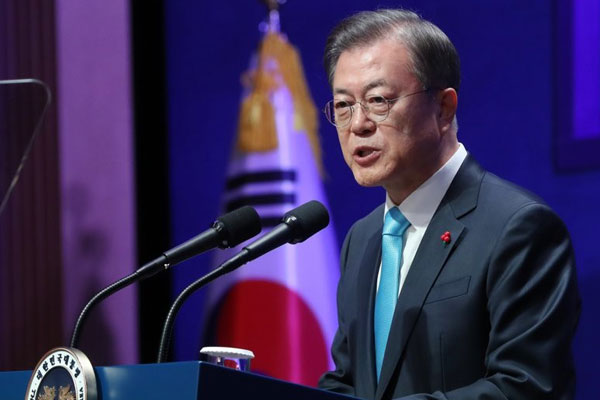 President Moon Jae-in has adopted “leap in co-prosperity” as his administration’s catchphrase for 2020.

Realizing that leap requires building a fairer society where the nation's prosecution and other institutions of power respect the rights of individuals and regain the public’s trust.

During his speech at a New Year event at the Korea Chamber of Commerce Thursday, Moon renewed his commitment to reforming the prosecution, widely accused of conducting politically motivated investigations.

With Prosecutor-General Yoon Seok- in the audience, the president encouraged institutions of power to take the lead in reforming themselves.

On the North Korea front, in 2020 is taking another leap in inter-Korean co-prosperity, despite the waning prospect of denuclearizing North Korea

“We will create a ‘Peace Community of Co-existence and Prosperity’ with the public’s longing for peace on the Korean Peninsula. Last year, too, we moved little by little towards peace on the peninsula, marching in step with the international community. The will for dialogue continues between the leaders of North Korea and the United States, too. ‘Peace’ does not come without action.”

Moon on Thursday started the first official working day of the year, visiting Seoul National Cemetery with his cabinet officials.

In the cemetery guestbook, Moon wrote that he will begin "clear changes" for the country's next century.