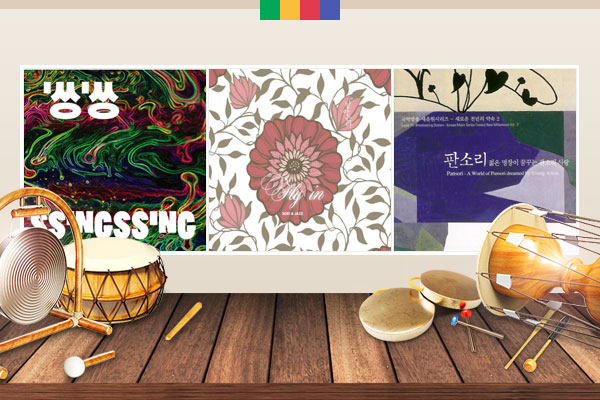 In the old days the term “norae(노래)” or songs referred to musical poems enjoyed mostly by the ruling class, while the songs sung by ordinary people were called “sori(소리).” But sometimes Korean poems referred to as “sijo(시조)” were set to folk melodies and sung by common people. Any kind of sijo(시조) could be set to music, so a sori(소리) could have many different poems as lyrics. Today’s first piece is a simple love poem performed by Ssing Ssing. The poem goes like this:

Love is a lie. My beloved’s feelings for me are also a lie.

I cannot even believe that he sees me in his dream.

If he spends many sleepless nights like me, how could he dream at all?

Ssing Ssing(씽씽) is a new type of music band that plays so-called Korean folk rock, a fusion of Korean folk music, glam rock, disco and many other genres. Three singers – Lee Hee-moon(이희문), Shin Seung-tae(신승태), and Chu Dae-hye(추다혜) – dressed in unconventional outfits and sporting unique hairstyles sing to original sounds. Their offbeat appearances and atypical music have earned them worldwide attention. The trio have appeared on American radio shows and various music festivals some of which can be viewed on the internet.

Next, we’re going to talk about Prelude, a jazz group formed in 2003 by students of the Berklee College of Music. It is often said that living abroad makes your heart grow fonder of your home country.

Perhaps that’s what happened to the members of Prelude. While they were studying abroad, they thought that Korean traditional music went well with jazz. That was when they met Gyeonggi(경기) folk singer Jeon Young-rang(전영랑), who inspired them to release an album of fusion folk songs. It provided a fresh take on Korean folk music and appealed to both gugak(국악) purists and jazz lovers. Now let’s listen to Tapyeogga(태평가), which means the song of peace, sung by Jeon and accompanied by Prelude.

Here is a translation of a couple of lines from Taepyeongga(태평가).

Since there are too many upsetting things, I might as well have some fun.

It basically says there is no use worrying and fretting, because trouble is bound to happen in our lives and being annoyed won’t solve problems. Instead, we should enjoy life and savor every moment of it. Don’t you think this is a good attitude to have towards life?

When we talk about the merger of gugak(국악) and jazz, samulnori(사물놀이) master Kim Deok-su(김덕수) is touted as the pioneer of the hybrid genre. After he gained global fame with samulnori(사물놀이), he used his musical experiences to collaborate with musicians around the world. One of the projects brought jazz and gugak(국악) together and provided people tired of the same old gugak(국악) style with a new style of Korean traditional music. Today’s Sounds of Korea episode will conclude with one such fusion piece, “Saetaryeong(새타령)” or “Bird Song” from the southern region. This cheery song features imitations of several bird calls that can be heard in the mountains in springtime. Here’s a tip to enjoying “Saetaryeong(새타령)” - Listen for different bird sounds and see if you can name the birds. Today’s piece will be sung by Nam Sang-il(남상일) with accompaniment from Kim Deok-su(김덕수) and his band.