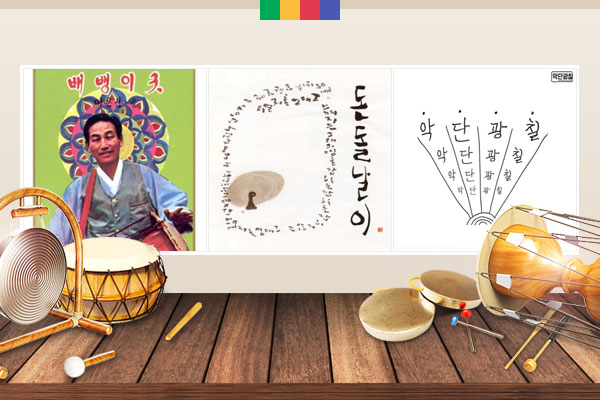 Baebaengi-gut(배뱅이굿) is a song that was sang most often in the Hwanghae(황해) and Pyeongan(평안) regions in what is now North Korea. It is also called “seodo(서도) pansori(판소리),” which means the pansori(판소리) of the western region, since a lone singer tells a long story in the pansori(판소리) format. The story of Baebaengi(배뱅이굿) is an amusing one that involves unrequited love and the calling of a dead spirit and even possession. Baebaengi(배뱅이) was the daughter of Minister Choi. She was the apple of their eyes and Minister Choi and his wife wanted their beautiful daughter to marry into a good family. But the girl fell in love with a young Buddhist monk and eventually died when her affection wasn’t returned. The minister and his wife called famous shaman priestesses from all around the country in the hope of contacting their daughter’s spirit in the netherworld. Upon hearing this news, a no-good scoundrel in Pyongyang(평양) decided to con the bereaved couple and pretended to be a shaman priest who could perform the séance. He lied that he could see their daughter’s spirit and cried out, “Here’s Baebaengi(배뱅이), here’s Babaengi(배뱅이).” This is the passage we’re going to listen to shortly. Here’s master singer Lee Eun-kwan(이은관) to sing that part from Baebaengi-gut(배뱅이굿)

Gut(굿) is a blanket term for assorted shamanistic rituals that vary by region and purpose.

When a gut(굿) is performed for personal reasons, it usually involves giving thanks to deceased ancestors and guardian spirits that protect the home and warding off evil spirits and diseases. Among them is a ritual called “gongsu(공수),” which is similar to a séance or possession. A dead person’s spirit enters the body of a shaman priestess, who speaks to the living on behalf of the dead. Through this process, the living and the dead can deal with unresolved issues, freeing the spirits from the concerns of this world and to go over to the other side. There is no knowing what really happens after death, but this ritual helps the living let go of their regrets and gives them peace of mind. The scoundrel from Pyongyang(평양) may have gotten away with his scam and been rewarded with lots of money and jewelry, but his lies could have provided the dead girl’s parents with some comfort and closure. Now we’re going to listen to two folk songs from the Bukcheong(북청) region in Hamgyeong-do(함경도) Province. “Jeon Gap-seong Taryeong(전갑성타령)” is about a girl named Jeon Gap-seong(전갑성) who refuses to get married and “Dondolnari(돈돌날이)” is a chorus from the Bukcheong(북청) lion dance. Koh Jang-wuk(고장욱) and Dong Seon-bon(동선본) play the tungso(퉁소) and Kim Deok-rye(김덕례) sings the song.

The tungso(퉁소) is a Korean wind instrument that is not often played these days. But musicians in the Bukcheon(북천) region have preserved the tungso(퉁소) music tradition and thankfully the bamboo instrument has been enjoying a revival in recent years. Many Koreans also associate the region with water vendors. At the end of the Joseon(조선) Dynasty, many residents moved to Hanyang(한양), the former name of Seoul, to educate their children. They supported their children by selling water, which didn’t require much investment. Water vendors from Bukcheon(북천) were so hard-working and close-knit that they practically monopolized the water trade in Hanyang(한양). Their diligence and sturdiness must have played a role in preserving the tungso(퉁소) music tradition. Now the last piece for today’s episode is the folk song “Nanbongga(난봉가)” from the Hwanghae(황해) Province. The term “nanbong(난봉)” means debauchery, so people mistakenly have negative notions about “Nanbongga(난봉가),” but it’s more like a love song of moderate tempo. Here’s the gugak(국악) band Akdan Gwangchil(악단광칠) performing “Nanbongga(난봉가).”