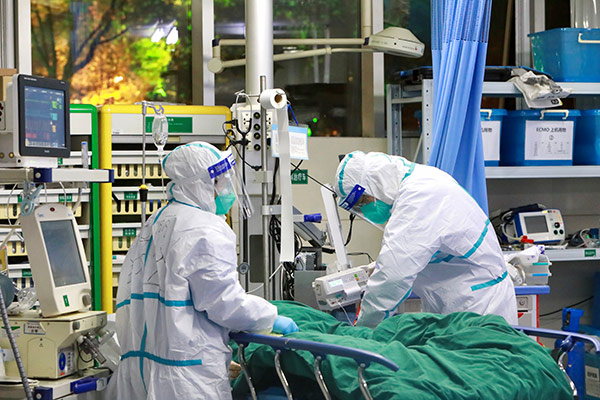 On January 30th, the World Health Organization declared a public health emergency of international concern over the outbreak of the new coronavirus. The declaration is the WHO’s highest level of alarm, raising fears over the spread of the virus. The WHO does not recommend restrictions on travel or trade with China, where the virus originated. Still, the outbreak will inevitably deal a blow to the South Korean economy, as China accounts for 25 percent of Korea’s total exports and Chinese tourists make up 34 percent of inbound visitors to the country.

Today, we’ll discuss the coronavirus outbreak, which has emerged as a grave downside risk to the economy, with economic commentator Chung Chul-jin.

So far, the outbreak has not had a considerable impact on the world economy overall. But fears are being perceived in stock and foreign exchange markets, with stock markets in Asian countries such as Hong Kong, South Korea, Taiwan and Japan tumbling. International oil prices, in particular, have fallen drastically by over 10 percent, reflecting growing concerns over the possible economic contraction in China, which is called the world’s factory.

China is also one of the world’s largest consumers. If the coronavirus shows no clear signs of abating in China, markets in the U.S. and Europe will also suffer a blow.

China itself accounts for 15 percent of global GDP and nearly 25 percent of South Korea’s total outbound shipments. Given the significant size and role of the Chinese economy, it is easy to imagine that the ongoing spread of the virus will have a sizable impact on Korea and the rest of the world.

The new virus that first appeared in the Chinese city of Wuhan seems to be infecting not only people but the economy as well.

Last week, U.S. Federal Reserve Chair Jerome Powell expressed concerns that the outbreak of the virus may hurt China and the world economy as well. Quoting forecasts by a British economic research institute, a daily in Hong Kong has also warned that China’s economic growth rate may fall short of 5 percent this year.

China made up 4.3 percent of global GDP in 2003, when the Severe Acute Respiratory Syndrome or SARS epidemic reached its peak. But last year, its share jumped to 16.3 percent, indicating that the global economy will be hit harder by the new virus. The fallout is already being felt in the Korean economy.

It is the tourism industry that has been affected first, as you may expect, with the cancellation rate for trips to China reaching 100 percent. Local airlines have also been struggling, as a growing number of people call off their trips. Of course, a fall in oil prices is good news for the aviation industry. But if the pandemic spreads throughout the world and if it is not controlled quickly in a month or so, international travel will decrease.

With the new coronavirus spreading at an alarming pace, major airline companies around the world have suspended flights to China. Air carriers in Korea have also decided to suspend or reduce some of their flights to China temporarily, darkening their business outlook for this year.

If the virus spreads faster, analysts predict that the impact on the Korean economy might be bigger and more extensive than that of previous outbreaks of SARS and Middle East Respiratory Syndrome or MERS.

The new coronavirus can be compared to the two precedents— SARS in 2003 and MERS in 2015. Korea saw the outbreak of SARS in December of 2002, the year of the Korea-Japan World Cup, and the virus spread peaked between January and March the following year. The outbreak of SARS, which also originated in China, resulted in nearly a 1 percentage point decline in Korea’s GDP in the second quarter of 2003 and a 0.25 percentage point drop for the entire year. MERS, which had a high fatality rate, discouraged people from eating out and led to cancellations of concerts and shows. As a result, sales of small businesses were reduced by half.

According to the U.S. Center for Disease Control and Prevention, the MERS outbreak in 2015 is estimated to have caused Korea’s GDP to post a 0.2 percentage point fall that year. The number of foreign tourists visiting Korea plummeted to 750-thousand in June of 2015, about half of the 1.33 million a month earlier. The domestic economy was hit heavily, and the economy only grew 0.4 percent in the second quarter of the year.

The new coronavius could be transmitted even during the incubation period of 14 days. The problem is that it is spreading faster than SARS. So, it is assumed that its economic impact will be as serious as, or even more serious than, that of SARS. The Korean government now has the challenging task of fulfilling its growth target of 2.4 percent for this year.

On top of Korea’s heavy dependence on China for exports, Chinese tourists coming to Korea have a significant impact on domestic demand. In 2014 and 2015, a great many Chinese visitors, five to six million, spent money in Korea to contribute to boosting domestic consumption.

The Korean government is aiming for 2.4 percent economic growth this year in the hopes of more exports on the back of the rebound in semiconductors. It also expects that the possible Seoul visit by Chinese President Xi Jinping in the first half of this year will lead to some positive developments, such as the lifting of the ban on hallyu or South Korean pop culture in China and more Chinese tourists to Korea.

Due to the coronavirus epidemic, however, Korea’s exports to China will inevitably decline, while Chinese people will find it difficult to travel to Korea. The Seoul government needs to come up with appropriate measures to cope with the unforeseen risks.

Last year, China was the largest destination of South Korea’s outbound shipments. If the Chinese economy stumbles, Korea has to adjust its 2020 growth target and also its ambitious goal of drawing 20 million foreign tourists this year. Starting January 27th, China prohibited its nationals from leaving the country in group tours.

The Korean government has rolled up its sleeves to prevent the situation from dampening consumer sentiment.

Most importantly, the government should ensure public health and safety. For that purpose, it will spend its budget of 17.6 million US dollars in quarantine measures.

It will also carefully monitor stock and foreign exchange markets to ease market jitters stemming from the virus. The government will also have to reduce the impact on small businesses and self-employed people who have already been struggling. The government’s role in this situation is becoming increasingly important.

The government should minimize the possible fallout from the outbreak by preventing the fears over the virus from spilling over to the economy and stabilizing financial markets.