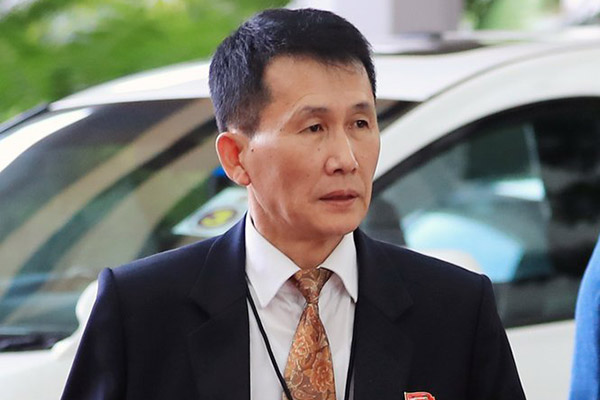 North Korean leader Kim Jong-un has summoned his distant family members overseas back home, with their posts replaced by other diplomatic officials. On March 14, the Ministry of Foreign Affairs in Pyongyang announced that Choe Kang-il(최강일), former deputy director general for North American affairs at the Foreign Ministry, would assume the role of the new ambassador to Austria. The post was previously held by Kim Kwang-sop(김광섭). Meanwhile, Ju Won-chol(주원철), former director of the Foreign Ministry’s second European Department, has been appointed as North Korea’s top diplomat to the Czech Republic to replace Kim Pyong-il(김평일).

The ministry also named Ambassador to Britain Choe Il(최일) as the top envoy to Poland, Han Song-u(한성우) as the new ambassador to Iran, and Jong Song-il(정성일) as the ambassador to South Africa.

Among the newly appointed diplomatic officials, the most attention-grabbing figure is Choe Kang-il, the new ambassador to Austria. Here is political commentator Lee Jong-hoon to explain the latest reshuffle of North Korea’s foreign affairs officials.

Choe was one of the members of the North Korean delegation of the closing ceremony of the PyeongChang Winter Olympics in South Korea in February of 2018, when he accompanied Kim Yong-chol(김영철), vice chairman of the Workers’ Party. But Choe is better known for his active involvement in negotiations with the U.S. as an expert on nuclear issues. Before the second summit between North Korea and the U.S. in Hanoi in February last year, he joined Kim Hyok-chol(김혁철), Pyongyang’s special representative for the U.S., to discuss the agenda for the summit with U.S. officials. He also attended working-level negotiations ahead of the first North Korea-U.S. summit in Singapore in June of 2018. Given his previous role in nuclear talks with the U.S., his latest appointment as the ambassador to Austria definitely merits attention.

Some analysts say that the appointment of Choe, who is a longtime expert on U.S. affairs, as the top envoy to Austria means the collapse of North Korea’s nuclear negotiation team. The analysts say that Pyongyang is not interested in nuclear talks with the U.S. for now. Christopher Hill, former U.S. assistant secretary of state for East Asia, agrees on this view. He predicted on Monday that North Korea would not show major change until the presidential election in the U.S.

Different experts, on the other hand, say that Choe has been appointed to the correct position because Vienna is an ideal place for unofficial talks between North Korea and the U.S. Others also speculate that North Korea may intend to use Austria as the second “New York channel,” as the International Atomic Energy Agency or IAEA is headquartered in Vienna.

Vienna is the center of diplomacy in Europe, where North Korea and the U.S. have often held meetings. In Vienna, where the IAEA headquarters are located, nuclear expert Choe may discuss nuclear issues with IAEA officials in the course of preparing for possible working-level negotiations with the U.S.

But other analysts say that North Korea simply excluded Choe from its nuclear negotiation team because it believes it would be difficult to hold dialogue with the U.S. before the U.S. presidential election.

Another eye-catching detail is that Ju Won-chol, an expert on European affairs, has been named as the ambassador to the Czech Republic. According to NK News based in the U.S., Ju previously served as a deputy at the North Korean embassy in Prague. It is said that he is fluent in Czech, as he studied at the institute of Far Eastern Studies at the prestigious Charles University in Prague. From January of 2015 to December of last year, the Czech ambassadorship was previously held by Kim Pyong-il, who is the half-brother of former North Korean leader Kim Jong-il, the father of current leader Kim Jong-un.

Many people here in South Korea know Kim Pyong-il, who is the relative of North Korea leader Kim Jong-un. Kim Pyong-il has been seen in North Korea only occasionally—during the funeral of his father and North Korea’s founder Kim Il-sung in 1994 and at the ambassadors’ conference in 2015. Kim had, in effect, lived in exile overseas for decades. It seems he was abruptly recalled back to Pyongyang last December, spawning speculation that leader Kim Jong-un has now regained confidence and tightened his grip of the regime.

The new ambassador to Austria Choe’s predecessor was Kim Kwang-sop, son-in-law of Kim Il-sung, while Kim Pyong-il is the half-brother of Kim Jong-il. The current leader summoned the two distant family members, who had been drifting around outside of North Korea, back home. Many experts believe that the leader is confident enough to allow their return, indicating that he doesn’t at all feel threatened by their return.

In the early years of his reign, Kim Jong-un had a hard time solidifying his power. He came to power after his father’s unexpected death, and I imagine he was rather unprepared. The outside world doubted that the new, young leader would stabilize his regime. The brutal execution of his uncle Jang Song-thaek occurred in the process, reflecting that Kim was not confident enough. But now, the leader has strengthened his power base, even holding bilateral dialogue with U.S. President Donald Trump. Now, he seems to be convinced of his solid hold of power.

In another scenario, Kim Jong-un may have worried that the former ambassadors might seek asylum while residing overseas. Whatever the reasons, it is true that the ambassadors couldn’t engage in diplomatic activities properly as North Korea strictly monitored and controlled their movement. It is speculated that the leader replaced them because he wanted other officials to perform their duties well and achieve results.

In the past, the international community was largely unreceptive to North Korea’s diplomacy. Little wonder North Korea was rather passive in its diplomatic activities. But the current leader is committed to diplomacy with the U.S. and China in pursuit of “a normal state.” While relations with the U.S. are important, of course, he may think that winning support from European countries will also be crucial to lead nuclear negotiations in a way it wishes. Another North Korea-U.S. summit is unlikely to take place before the U.S. presidential election, and it is important to create a favorable mood for North Korea in Europe during that time. I think that’s why the North has decided to send experienced diplomats to Europe as top envoys.

Following the recent appointments of the new ambassadors, North Korea’s new foreign minister Ri Son-gwon is expected to consolidate his grip on the ministry even further. As the former chairman of the North’s Committee for the Peaceful Reunification of the Country, Ri is notorious for his insulting remarks made to South Korean businesspeople who visited Pyongyang in September of 2018 for an inter-Korean summit. Stronger power wielded by this hard-liner is not very good news for the South Korean government.

The Seoul government may feel pressured to respond diplomatically to the hawkish North Korean foreign minister who holds tough stance toward South Korea. I think the South Korean government has been faring well in diplomacy so far and it should continue to cooperate with the international community when dealing with North Korea. It also needs to prepare for a possible change in Pyongyang’s diplomatic policy.

South Korea needs to pay attention to North Korea’s new ambassador to Austria Choe Kang-il, in particular, and accumulate expertise for a diplomatic war surrounding IAEA. The government should carefully analyze the latest shakeup in North Korea’s diplomatic lineup and devise an effective strategy to engage North Korea in dialogue.