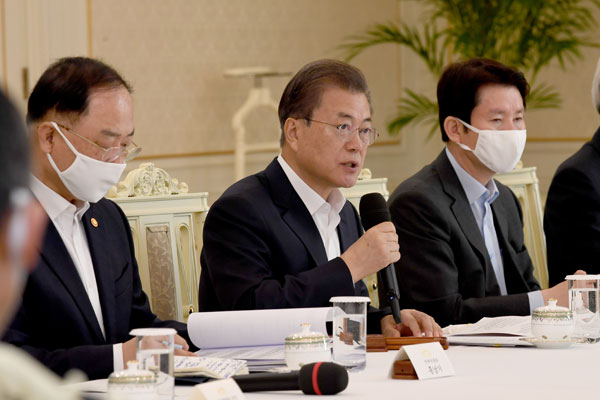 Moon made the announcement Thursday at the first meeting of a new emergency economic council that was attended by economy-related ministers, the central bank governor and chief of the Financial Services Commission.

The first council meeting marks the government entering emergency mode on tackling the economic blow from the outbreak.

Moon described the package as unprecedented comprehensive measures in scale and content aimed at stabilizing finances and public livelihood. He said the focus is easing the credit crunch faced by small-scale economic players.

Moon explained the entire financial sector lent support for the rescue package in order to supply ample liquidity and all available resources.

In addition, the maturity date of loans will be extended and interest rate payments deferred for SMEs and small business owners throughout the entire finance sector.

Full loan guarantees will also be provided for loans of up to 50 million won for business owners earning less than 100 million won a year. This means they can take out loans more easily at low interest rates.

President Moon said no matter how good a measure may be, it has to properly work out in the field and called for providing timely support such as by simplifying loan deliberation procedures.

It's not an overstatement to say the global economy has ground to a halt and South Korea is no exception.

Small business owners are among the first to bear the brunt of the current crisis as movement is restricted and various gatherings called off. Sales are plunging and there is little cash flow.

The inaugural meeting of the emergency economic council has focused on supporting small-scale businesses and the self-employed. The next meetings to come are expected to give attention to the socially vulnerable.

Though not mentioned during Thursday's meeting, the proposal on a disaster-related basic income payment for all citizens will also likely be discussed in the coming days.