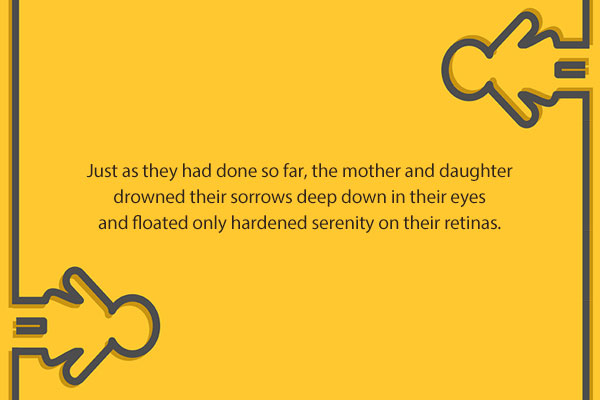 It was Jeong-sun who wanted to go all the way out to Paldal Road lined with beef rib restaurants. She probably didn’t want her daughter, who was visiting home, to have watery, bland kimchi at any old restaurant if she couldn’t cook for her at home.

More importantly, it was her daughter In-hye’s birthday today.  She probably couldn’t have celebrated her birthday properly, not while she struggled to make ends meet with her husband and children in Seoul.

It might have been due to the distance she had traveled today, but In-hye looked even more like a 30-ish woman exhausted by life’s heavy load.

Published in 1995, “Duet” is told from the perspectives of Jeong-sun and her daughter, In-hye.

“Just remember how he tormented you. Honestly, didn’t you hate him a lot? He caused you so much grief with his womanizing.”

“That’s not a nice thing for a daughter to say to her father. Womanizing, my god. I told you everyone lived like that in those days.”

“I will stay with you for a few more days. When else can I have the luxury to spend time with you like this? We’ll bad-mouth Dad.”

The two women looked at the photograph of Jeong-sun’s husband at the same time. Just as they had done so far, the mother and daughter drowned their sorrows deep down in their eyes and floated only hardened serenity on their retinas.

A duet refers to a musical piece played by two performers or two instruments. In this story, the lives of Jeong-sun and In-hye are likened to a duet. The two women have become mothers in two different time periods and seemed to have lived different lives – Jeong-sun lived as a simple housewife, but In-hye worked as a school teacher. However, they ended up living the same exhausting and lonely lives under the male-centered society. The mother and daughter discovered the weariness in each other and the discovery produced a poignant duet.