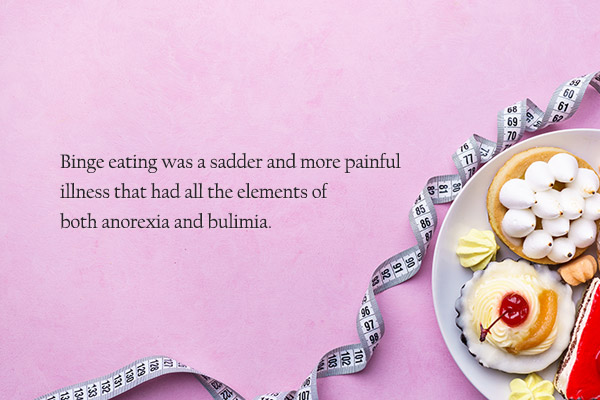 I was familiar with the term anorexia nervosa or something at the opposite end of the spectrum, bulimia nervosa, but I have never heard of binge eating.

Binge eating was a sadder and more painful illness that had all the elements of both anorexia and bulimia.

Ryu So-yeong’s “Ant, My Poor Ant” is about a young bulimic patient named Shin Ju-yeon who died in a car accident.

The sense of taste is known as the most social of all human senses. When you think about it, dining is very much a social behavior. We often say “Let’s get something to eat” when we want to know someone better. The Korean word for family, “sikgu,” means those who eat together. In this story, the topic of eating, especially binge eating, is used to describe loneliness and other issues stemming from human relationships.

“There must be a reason.”

“Yes, I used to be a big eater since I was a child. I look like my sister only in the face. Our body shapes are completely different. I think I consciously started eating less ever since I started noticing my body. I wanted to appear smaller.”

“My sister and I were always together, like a pair of gloves. Everyone told us that we were both pretty, but I was tall and kind of looked tomboyish.”

: Debuted by publishing a poem in the winter volume of “Poem and Poetry” in 1994