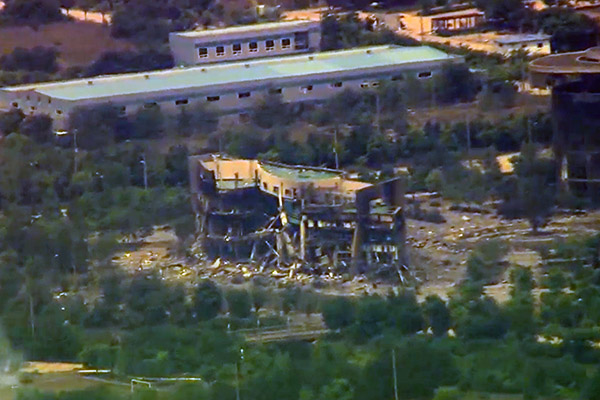 At 2:49 p.m., June 16, North Korea blew up the inter-Korean liaison office in Gaeseong. Earlier, on June 4, North Korean leader Kim Jong-un’s sister Kim Yo-jong released a statement and mentioned the possibility of the closure of the office. At the time, the first vice department director of the ruling Workers’ Party Central Committee took issue with anti-communist leaflets sent across the border by North Korean defectors and activists in South Korea. On June 13, she warned that a tragic scene of the completely demolished North-South joint liaison office, deemed useless, would be seen before long. And in just three days, North Korea put that threat into action. As a result, the joint office vanished, 21 months after its opening. Here is political commentator Kim Hong-guk with more.

The explosion of the four-story building was clear and loud enough to be seen and heard even along the South Korean border. The shocking event came after North Korea vowed to deal with South Korea as an “enemy.” The destruction of the building, the symbol of inter-Korean cooperation, means that bilateral ties have hit their worst point since the June 15 inter-Korean joint declaration in 2000.

The joint liaison office was one of the symbolic achievements of the Moon Jae-in government’s North Korea policy. It served as the first permanent communication channel between the two Koreas since national division. It opened in Gaeseong on September 14, 2018, 140 days after the Panmunjom Declaration was signed by the leaders of South and North Korea. The office was considered to be the beginning of constant cross-border dialogue, as it allowed officials from the two sides to talk with each other face-to-face in the same building.

The office was one of the key achievements that came from the Panmunjom Declaration announced on April 27, 2018. It was a venue for facilitating inter-Korean contact, meetings, consultations and exchanges and also guaranteeing the convenience for personnel from both sides. The first floor was mostly used for training, and the third floor had meeting rooms. The second floor was used by South Korean officials, while the fourth floor accommodated their North Korean counterparts. The Vice Unification Minister served as the chief of the South’s office, while the vice chairman of the Committee for the Peaceful Reunification of the Fatherland headed the North’s office. About 30 officials from each side worked there.

Unfortunately, the liaison office was closed on January 31 this year over the COVID-19 concerns, with officials from both sides leaving. Less than five months later, North Korea demolished it. What a shame. The explosion is seen as Pyongyang’s unilateral destruction of the inter-Korean declaration and agreements.

On Wednesday, a day after North Korea blew up the office building, Kim Yo-jong slammed South Korean President Moon Jae-in over his speech commemorating the 20th anniversary of the June 15 inter-Korean joint declaration in 2000. In a statement, she said it was sickening to hear Moon’s speech full of excuses, irresponsibility and deep-rooted flunkeyism.

In his speech marking the 20th anniversary of the first-ever inter-Korean summit in 2000, President Moon once again called for cross-border cooperation. But Kim Yo-jong described the speech as “an old scheme” and “disgusting.” She accused South Korea of shifting the responsibility on to the North and criticized Moon for only using a shallow trick to save face. United Front Department Director Jang Kum-chol(장금철) has also lashed out at President Moon and the Seoul government, saying that everything between the two Koreas so far will be regarded as just a dream. North Korea uses harsh words against the South, such as “disgusting,” “cowardly” and “weak.”

In brief, North Korea has made it clear it will sever relations with South Korea. A stream of Pyongyang’s verbal attacks targeting South Korea and its president indicates that inter-Korean relations will face even greater difficulties and crisis.

The presidential office in Seoul has strongly denounced Kim Yo-jong for her “rude and senseless” rhetoric against Moon and warned that it will no longer tolerate it. Senior presidential secretary Yoon Do-han said in a briefing on Wednesday that the recent series of North Korea’s words and acts would not be helpful for the North and it should be fully responsible for all consequences. He also said that North Korea, most of all, should have basic etiquette. This is seen as the Moon Jae-in government’s strongest criticism of North Korea.

So far, the presidential office has advocated inter-Korean cooperation and exchanges, despite many difficulties. But the abrupt, unilateral demolition of the joint liaison office, the symbol of cross-border cooperation and the Panmunjom Declaration, is clearly an act of hostility. South Korea has sent messages to the North in a careful and temperate manner thus far. However, Yoon’s statement on Wednesday shows the presidential office’s firm determination not to let the situation worsen further. On Wednesday morning, it convened an emergency conference of the National Security Council. During the meeting, it reaffirmed that North Korea had done what it shouldn’t have and that South Korea would respond firmly to Pyongyang’s extreme offensives.

On Wednesday, the Ministry of Unification in Seoul expressed strong regret over North Korea’s explosion of the joint liaison office, calling it a violation of South Korean people’s property rights. The Ministry of National Defense has said that it will strengthen its monitoring of North Korea and the readiness posture to prepare for any situation near the military demarcation line.

Hours before North Korea blew up the liaison office on Tuesday, the General Staff of the Korean People’s Army in the North said that it would send troops back into a border zone that was previously disarmed under an inter-Korean agreement. On Wednesday morning, it announced detailed plans to redeploy troops to the Mt. Geumgang tourism zone and the Gaeseong Industrial Park, and to restore guard posts in the Demilitarized Zone.

The government should explain its position to North Korea and persuade it to refrain from provocations on the one hand. But it also has to give warnings and place pressure on the other hand. While employing the two-track strategy, Seoul must closely monitor North Korea’s movement.

It is easy to imagine South Korea’s public sentiment toward North Korea is becoming increasingly negative. Calls are growing for restoring South Korean guard posts in the DMZ and high-intensity frontline training should be conducted, with the possibility of North Korea’s military aggression in mind.

The North Korean military has said that it will distribute its own propaganda leaflets along the borderline. In response, some analysts in South Korea say that the Unification Ministry should reconsider its plan to ban the sending of anti-communist flyers into the North. But commentator Kim has a different opinion.

I think the government’s North Korea policy should be consistent and it must manage inter-Korean relations from a long-term perspective. Leaflets floated by North Korean defectors strongly criticize and provoke the North, and they are mostly ineffective and don’t help South Korea’s peace efforts. So, I think it is right to ban the leaflet campaign.

South Korea should respond sternly to Pyongyang’s military provocations, but it is not appropriate to be in a tit-for-tat over North Korea’s military action. South Korea is an economic power and wins trust from the international community in terms of security issues. If South Korea takes military action first, it may escalate into a major clash to aggravate the situation. This is indeed a short-sighted move.

North Korea is likely to implement measures that will plunge inter-Korean relations deeper into a crisis. The South Korean government and the presidential office are growing anxious as to how to deal with North Korea, which is deliberately stoking tension.