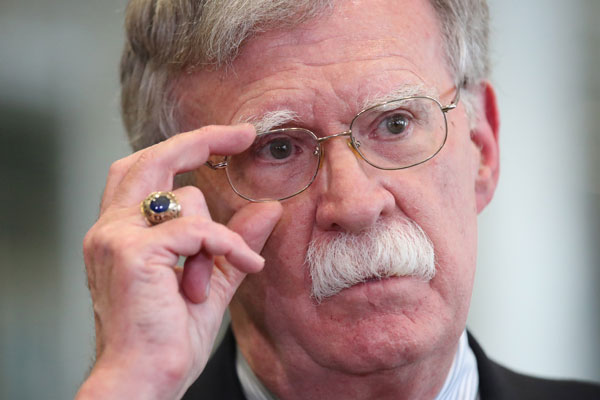 "I don't think he's fit for office. I don't think he has the competence to carry out the job. There really isn't any guiding principle that I was able to discern other than what's good for Donald Trump's re-election."

"Well, I think he was so focused on the re-election that longer term considerations fell by the wayside."

In an exclusive interview with ABC News' Martha Raddatz, Bolton discussed his new book, "The Room Where it Happened: A White House Memoir."

Raddatz: "Donald Trump, as we say, sees himself as a dealmaker. What happened to the dealmaker in those situations?"

Bolton: "Well, the president may well be a superb dealmaker when it comes to Manhattan real estate. Dealing with arms limitation treaties on strategic weapons, dealing in many, many other international security issues are things far removed from his life experience."

The book contains his accounts of Trump's foreign policy decisions, including the U.S.-North Korea nuclear talks.

"Three significant chapters on North Korea - one on Singapore and one on Hanoi... "

"When Chung Eui-yong, South Korean national security adviser, came to Washington and said Kim Jong-un is interested in meeting with Trump, Bolton suggested that, it was Seoul who suggested to the North to make this invitation in the first place. So, Bolton suggested President Moon also told trump that Kim had committed to complete denucelarization. So again, I think there is this kind of high level expectation, and Bolton, it seems to me, was kind of blaming South Korea for setting up this unrealistic expectation.

The hawkish former national security adviser was quoted as writing that "the whole diplomatic fandango was South Korea's creation," related more to its 'unification' agenda than a serious strategy.

On the collapse of the 2019 Hanoi summit with Kim, Bolton was cited as saying that Trump stayed up all night watching Michael Cohen testify, and chose to walk away to create a bigger story.

From Bolton's point of view, a big deal wasn’t going to happen because Kim did not make a strategic decision to give up his nuclear arsenal, according to Sue Mi Terry.

The Trump administration asked a court to prevent the release of the book, claiming it contains classified material.

The White House said it is despicable that Bolton chose to publish the book without fully going through the review process, calling him a misguided hawk on foreign policy and a weak dove of an author.

"Again, I'm not going to get into details on this. It's going through the review process, it shouldn't be out."

Unless a temporary restraining order is issued, the memoir is set to be released Tuesday.