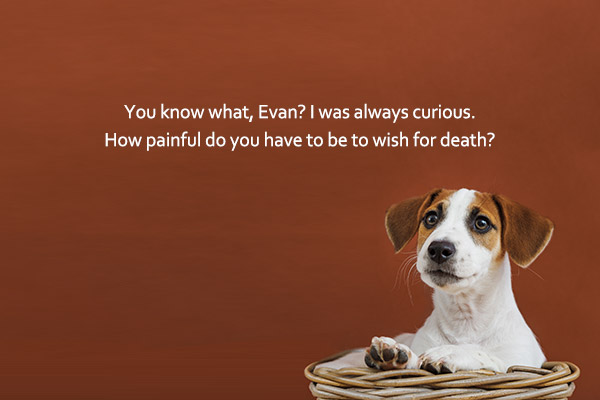 Chan-seong discovered a dog chained to the fence. That evening, when he returned to the truck stop for an errand, he found the dog still there.

Chan-seong has seen such dogs before, the dogs that hysterically ran after their owners’ cars after they were dumped on the roadside in the middle of the night. He knew where the dogs abandoned at the truck stop were taken.

Chan-seong finished up the soda left in his cup and put his hand in the cup to grab an ice cube.

The white dog smelled Chan-seong while circling him. As if he made up his mind, he then sniffed at Chan-seong’s palm before licking the ice with his tongue.

Something supple, cold, warm, ticklish and soft swept through Chan-seong. It was a sensation he had never felt before.

The ice cube was gone, leaving only a slight water mark. At that time, a strange mark appeared in Chan-seong’s heart. He couldn’t understand what it was.

The story doesn’t directly refer to economic inequality, indifference, selfishness, and marginalization that rendered the lives of Chan-seong and Evan so tragic. But readers come to ask the following questions as they read Chan-seong’s last moment, walking along the dangerous expressway shoulder. Why did this kindhearted boy have to endure poverty and loneliness all alone? Why was the friendly dog abandoned and why did it choose to die? We come to realize the world’s cruelty that took away Chan-seong and Evan’s happiness.

Evan’s wet eyelashes quivered lightly. Chan-seong carefully looked at Evan’s mouth, whiskers, nose, and each one of the eyelashes.

“You know what, Evan? I was always curious. How painful do you have to be to wish for death? Evan, are you in that much pain? I’m sorry for not realizing how painful this is for you. If you can’t bear the pain no longer, if the pain grows too much, please let me know. Okay?”

: Debuted with short story “No Knocking in This House” in 2002