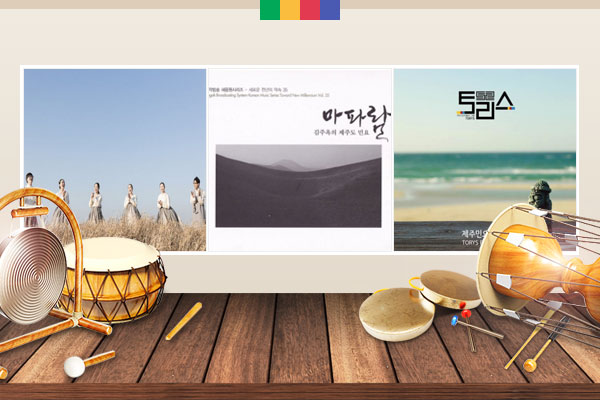 Last Thursday was Chobok초복, the first heatwave of the summer, and next Sunday will be Jungbok중복, the second heatwave. Now is Daeseo대서, the hottest season of the year, according to the traditional seasonal calendar. There is a saying that it is so hot in Daeseo that even goat horns melt in the sweltering heat. This is also the most popular time for office workers to go on summer vacation. Even in the old days, when there was no notion of taking summer holidays, people would stop working, relax, and have a good time out in the sea or the mountains. Back then, Koreans would have taken it easy by napping under the cool shade or dipping their feet in cold, refreshing creeks. Catching a couple of fish from the river and making stew would be the icing on the cake.

Nowadays, overseas travel or long vacations have become almost unthinkable as the coronavirus ravages the world. But let’s be creative this summer and overcome the summer heatwave by listening to some invigorating music. Today we will focus on folksongs from Jeju Island. The first song is about Yeongjusipgyeong영주십경, or “Ten sights of Yeongju.” Yeongju is the old name of Jeju Island, and the ten beautiful sights of the island include the sunrise over Seongsan Ilchulbong성산일출봉, the sunset from Sarabong사라봉 Peak, Jeongbang정방 Waterfall in summer, the tangerine orchards in fall, snow-covered Baengnokdam백록담 Lake on top of Hallasan한라산 Mountain, the wild horses running across the fields, and a Buddhist grotto at Sanbangsan산방산 Mountain. Today’s version is a modern adaptation of “Yeongjusipgyeongga” sung by the gugak ensemble Daolsori.

The next Jeju folksong was sung while preparing hay for cattle or horses in the old days. Farm animals have to eat even in winter, so farmers had to cut and dry grass and plant stalks during autumn. There are vast prairies at the mid-slope of Hallasan Mountain, which used to be where Jeju residents went to get hay for their livestock. In Jeju dialect, such plants are called “chol촐.” The chol-cutting work in Jeju was a community endeavor, just like rice planting or harvesting was on the mainland. People living in the eastern part of the island generally used small sickles called “homi,” while those in the west used larger ones called “jinnat진낫.” When one person wielded a jinnat to cut down the hay, the rest would follow him and rope the hay together for easy transport. It must have been exhausting and tedious to handle the big tool and stoop down to bundle the hay. At times like that, a person with a good voice would sing a song to liven up the atmosphere and energize other workers. Such work songs are called “hongaegisori홍애기소리,” and the labor song, particularly for chol-cutting, was called “cholhongaegi촐홍애기.” Let’s listen to Kim Ju-ok singing “The Chol-cutting Song.”

Music historians believe that those from Seoul and Gyeonggi-do Province influenced Jeju folksongs. Perhaps that’s why Jeju folksongs sound light and cheerful, not like the melancholy ones from the southern or western regions. When you listen to the Jeju dialect, you may think it sounds like a foreign language. So, Jeju folksongs naturally sound more exotic than the songs from other regions. It’s become quite popular among today’s young traditional musicians to arrange Jeju folksongs into several different renditions. Now let’s listen to the gugak a cappella group Tori’S singing three Jeju folksongs in a row – “Iyahong Taryeong이야홍타령,” “Seowuje Sori서우제소리,” and “Neoyeong Nayeong너영나영.” “Iyahong Taryeong” features a refrain that goes, “Iyahong yahong,” and “Seowuje Sori” used during shaman ritual performances. “Neoyeong Nayeong,” meaning “you and me” in Jeju dialect, sings about a young couple in love.