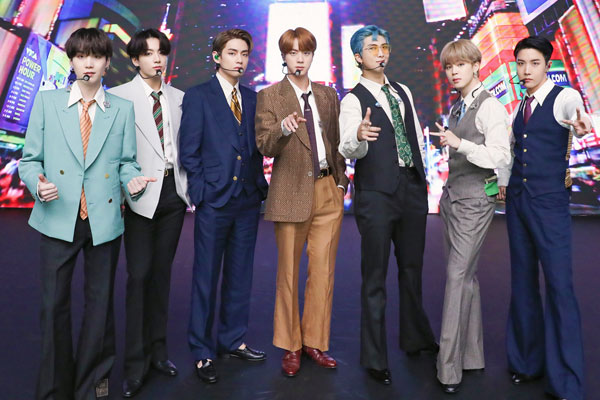 K-pop boy band BTS has made history by becoming the first South Korean act to top the Billboard Hot 100 chart with its first English-language song "Dynamite."

At an online press conference Wednesday, BTS's RM said his band feels that the group is gaining respect in the U.S.

"We definitely feel that. I think in the perspective of culture, I think it's really important to be familiar. So first, we think, too, that for many Americans we're not very familiar with (us) - we look different, we (sing) different, we got some different choreography, music videos, like everything, even lifestyle. But I think as time goes by, we're doing these shows and songs and concerts and awards, I think quite a lot of people in the American music market is getting like kind of close (to us). I think it's very good and that's what we wanted actually."

It's the first time a South Korean artist has topped the chart. BTS's "ON" peaked at No. 4 earlier this year. Now the group has its eyes on the Grammys.

"I mean, we hope. We hope so! There's not the right time. No one knows about the Grammys. We hope we can get a nomination, but we're just doing our best, that's all we can say."

RM continued that more than being nominated, BTS hopes to perform in the awards show on a solo stage. Previously, the group performed in the Grammys in collaboration with U.S. rapper Lil Nas X, becoming the first South Korean artists to perform at the prestigious music event.

"I think it's thanks to these fans that we can continue to work hard and with passion. Our relationship with our fans, ARMY, isn't one we can easily describe with one word but it's one of mutual synergy. Because of ARMY, we could be doing this interview right now. We give each other energy and build each other up. It's thanks to our fans that all this has been possible; they're amazing people and we hope to continue to do our best... "

In addition to hitting No. 1 on Billboard this week, last Sunday BTS brought home four MTV Music Video awards, tying in second for the most awards with U.S. singer Ariana Grande. The group beat out such big names as Lady Gaga, Dua Lipa and the Jonas Brothers to win Best Pop, Best K-pop, Best Group and Best Choreography.

Nominees for the 2021 Grammy Awards will be announced later this year.