Abe’s Exit and Future of ‘Abe-nomics’ 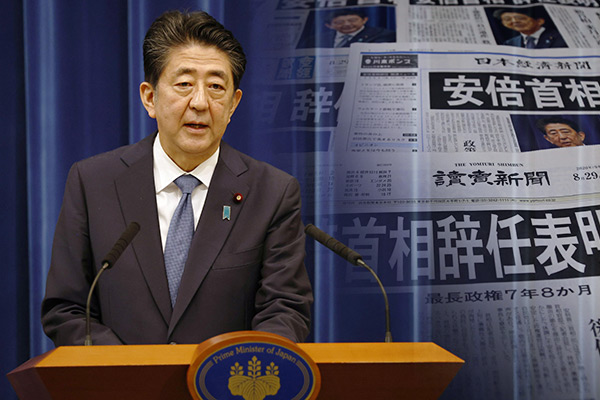 On August 28, Japanese Prime Minister Shinzo Abe said that he would resign due to his failing health. Three names are being cited as possible successors to Abe, with Chief Cabinet Secretary Yoshihide Suga emerging as a clear favorite in the race. Under Japan’s parliamentary political system, the leader of the ruling Liberal Democratic Party will become prime minister. Ahead of the party’s leadership vote, Suga is reportedly supported by five of the party’s seven factions.

Here’s Cho Yong-chan, director of the America China Economic Research Institute, to discuss if Abe’s economic policy will change and whether economic conflict between South Korea and Japan may ease after Abe’s departure.

Under Abe’s rule, stock prices have doubled, the Japanese yen has stayed weak and the unemployment rate has halved. However, the local economy has shown poor performance on the whole. It suffered the worst growth in 65 years, far from attaining its growth target of 2 percent. Consumer prices remained at 0 percent growth, distant from the nation’s 2 percent target. The job market is frozen, while the per-capita real wage shrank 3.5 percent. The Japanese economy is still mired in deflation.

The country will not meet its goal of reaching a GDP of 600 trillion yen in 2020. Whoever becomes the next prime minister, it will be difficult to overhaul Abe’s economic policy drastically. Moreover, the next leader will find it hard to exert his political leadership, as he will assume the post only for a short period of time. It’s hard to expect a virtuous circle, especially in the middle of the COVID-19 crisis, in which an improvement in corporate earnings will lead to a rise in wages and consumption.

Many experts admit that Abe’s economic stimulus policy, known as Abe-nomics, did breathe new life into the Japanese economy. But the stimulus measures have also revealed its limitations amid the COVID-19 pandemic. Speaking of the virtuous circle pursued by Abe-nomics, high profits made by Japanese companies did not actually lead to a wage increase. On the contrary, the per-capita wage for workers has decreased, while consumer price growth has been running on the spot.

Japan’s fiscal conditions have worsened as well. It released two revised supplementary budgets to cope with the economic fallout from COVID-19. As a result, government spending is expected to reach a record 160.3 trillion yen this year. Meanwhile dependence on debt for national finance is estimated to rise to 56.3 percent, the highest percentage ever. The fiscal deficit was 2.6 percent of GDP last year, but the figure is expected to rise to 12.6 percent this year.

Abe-nomics has “three arrows”: bold quantitative easing, the swift execution of fiscal spending and a growth strategy of reviving private investment through structural reform. Unfortunately, the arrows have all missed the target by a mile. And the fourth arrow, namely, the Tokyo Olympics, fell short. This year, the Japanese economy is expected to contract 6 percent, at best, or 16 percent in the worst-case scenario. 30 percent of listed companies in the country run a deficit now. In terms of per-capita labor productivity, Japan ranked 21st among 36 members of the OECD in 2018. It has continued to decline since the introduction of Abe-nomics in 2012.

Abe-nomics has apparently failed. The Japanese economy has transformed itself from an export-driven economy to a consumption-driven one. But in the process, the policy of reviving the past glory failed to reflect the reality properly. While the gap between the policy and the reality were only widening, the government made misstep after misstep. After all, it missed the right time to remedy the problems in a comprehensive way.

This year, the Japanese economy suffered its sharpest second quarter contraction on record. The world’s third-largest economy shrank for three consecutive quarters for the first time since 2011 when a devastating earthquake hit east Japan. Typically, recession is defined as two consecutive quarters of negative growth. It seems Japan slipped into recession faster than other major economies such as the U.S. and China.

Nevertheless, Japan is free from concerns about a foreign exchange crisis and sovereign default.

Japan’s national debt exceeds 1,100 trillion yen, while its tax revenue is around 62 trillion yen. It means the debt is about 18 times more than the revenue. If this was the case with a private company, it would be declared insolvent immediately.

Japan has never seen a currency crisis, as its foreign exchange reserves amount to 1.37 trillion US dollars. Japan is the world’s largest creditor, in terms of net external assets. Outstanding Japanese government bonds are roughly 964 trillion yen, and 90 percent of them have been purchased by local companies and citizens. Even if some Japanese megabanks go bankrupt, the country can still lend money by letting its central bank print money. It comes as no surprise that Japan’s credit risk is low.

The next Japanese prime minister will serve only the remainder of Abe’s term. While announcing his candidacy for the ruling party’s leadership race on September 2, Suga made it clear that he would inherit Abe’s policies. Analysts predict that the so-called “Suga-nomics” will keep Abe-nomics intact and add some growth strategy.

Suga clarified that he would continue to implement Abe-nomics reforms. He explained that the hasty normalization of the monetary policy might ruin anti-virus measures and bring about the yen’s sudden appreciation. Perhaps, the new prime minister may adopt some tight monetary policy to show to the public that the government is trying to enhance fiscal soundness.

For South Korea, a matter of concern is whether economic conflict between South Korea and Japan may be resolved after Abe’s resignation. While Abe has highlighted his own distinctive ideology, Suga is considered a politician who has a reality-based perspective.

Filling in for Abe for about a year, the new prime minister is expected to focus on countermeasures against COVID-19. Even if a new prime minister is elected in October next year, his top economic goal will still be overcoming deflation. He will inevitably resort to policies to stimulate domestic demand through monetary easing or fiscal injection.

Whoever becomes the new prime minister, no one will take a soft approach toward South Korea. Led by hardliners, the new Japanese administration will be a second version of the Abe government.

Most analysts predict that South Korea-Japan relations will unlikely see any major change even after the inauguration of the Suga government. Still, some speculate that the possibility of a bilateral summit within the year has increased.

The Seoul government is actually pushing for a three-way summit among South Korea, China and Japan in late November.

Some others strike an upbeat tone on the outlook for the performance of Korean automobile, semiconductor and mobile phone industries in the global market, as they can strengthen their price competitiveness if the weaker yen trend subsides.

In the era of a new Japanese prime minister, South Korea and Japan will hopefully seek an exit strategy to end their economic conflict.