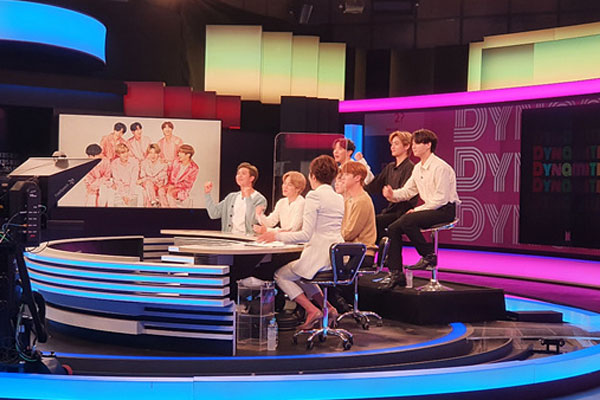 "As you know, the [COVID-19] situation is not all good, not just in South Korea but overseas as well. When we first produced this track, our biggest hope was to give some strength to our fans through something that we're good at, what we can do. Fortunately, our fans really liked and loved the song and I believe that has resulted [in the track topping the Billboard chart.]"

The seven-member act debuted at No. 1 last week, becoming the first-ever South Korean artist to conquer the highly coveted chart. "Dynamite" remained at the top spot for a second consecutive week this week.

Member Jimin said they were disappointed that they could not share their joy with fans, better known as ARMY, in offline meetings due to the pandemic.

"We have always had a special bond with our fans. Ever since our team was just starting out, we always felt that our fans were with us when making music and performing."

As for possible reasons for the hit, member RM said the song seemed to appeal to many people, likely as it is in English and the familiar disco-pop genre, adding they wanted to offer something hopeful and playful to console people facing depression in difficult times like this.

"I believe the way we truthfully appeal to people despite differences in language, nationality or race, was by reaching out to them and they either became our fans or began to like us. And all those things accumulated and exploded to become 'Dynamite.'"

BTS said it is now dreaming of performing as a stand-alone act and winning a prize at the Grammy Awards in the United States. Last year, the group performed at the Grammys in a collaboration with Lil Nas X.