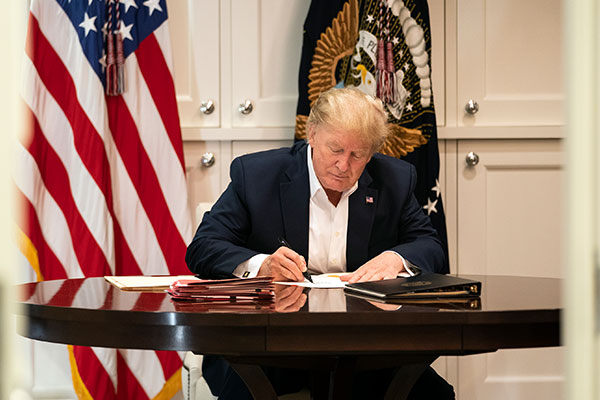 The president tweeted in the early hours of Friday morning that he and the first lady had tested positive for Covid -19 and would begin to quarantine.

Trump’s positive test result came just hours after the White House announced that senior aide Hope Hicks had tested positive for the virus after traveling with the president several times this week.

Later on Friday, Trump was transported to a military hospital. Reporters on the scene said that Trump walked normally and did not show any visible signs of sickness.

Citing two officials familiar with his condition, the Washington Post said Trump is struggling with a low-grade fever, a cough and nasal congestion, among other symptoms.

President Moon Jae-in sent a message to Trump on Friday, wishing for his and Melania Trump’s speedy recovery.

In the message, Moon said "my wife and I, along with the South Korean people, wish for the president and first lady's swift recovery."

In a message released on the state-run Korean Central News Agency on Saturday, Kim offered sympathy to the president and the first lady and wished them a full recovery as soon as possible.