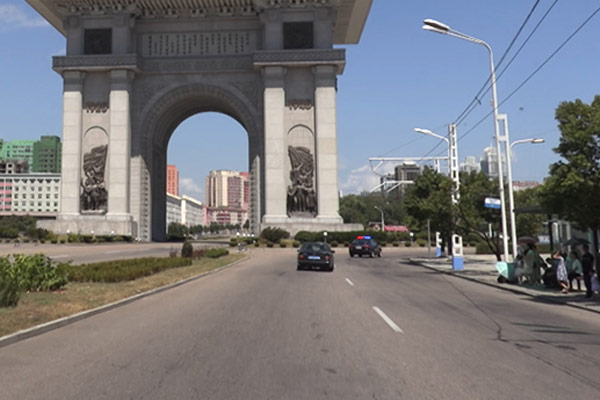 These days, many people practice social distancing in an effort to prevent the spread of COVID-19, leading to greater demand for delivery services including food delivery. In line with this trend, violations of traffic rules, whether big or small, are also on the rise. Police stations across South Korea crack down on violators of traffic regulations to maintain order. So, how does North Korea regulate traffic? Here is lawyer Oh Hyun-jong to explain whether North Korea has any rules concerning traffic.

North Korea does have traffic regulations on railroads, railway trains, automobiles and subways. The road traffic law, for example, was enacted in 1997. It was revised as many as seven times until 2011, reflecting that North Korean society changed a lot during the period. Consisting of 168 sections, the law deals with everything related to traffic in the country, including roads, pedestrians, traffic facilities, how to obtain a driver’s license, how to handle traffic accidents, policies to prevent traffic jams and other relevant rules.

The revised version in 2011 even includes the provision to make it mandatory for drivers to clean their vehicles. Under the revised law, those who cause a traffic accident are deprived of their driver’s license. It also introduced an alternate-day no-driving system.

In South Korea, traffic laws are becoming stronger. The mandatory wearing of seat belts by drivers as well as the ban on the use of mobile phones while driving has taken firm root now. Legal basis has been arranged to eradicate road rage, also known as “retaliatory driving,” which is a threat on the road. Car accidents in school zones are subject to heavier punishment than before, while parking and stopping around fire-fighting facilities are prohibited. School buses must activate a check system designed to ensure that no child is left on the bus. Also, the frequency of driver’s license renewal for people aged 75 and older has been shortened.

Traffic regulations in North Korea are rather simple, compared to those in the South. That’s because there are fewer vehicles and the roads are therefore less crowded in North Korea. Lawyer Oh explains some differences between South and North Korea in traffic rules.

North Korea’s traffic law even regulates the sanitary conditions of individual vehicles and the habits of drivers. For instance, all drivers entering Pyongyang are required to wash their cars clean. Drivers of dirty vehicles are subject to a fine, and drivers should not smoke behind the wheel.

In North Korea, the first lane is the one that is closest to the sidewalk. This is opposite to South Korea. The first lane is for cargo trucks and buses, while the second lane is used by passenger cars. The central lane of wide roads, like seven-lane roads, is typically left empty, since it is used only by ambulances and fire trucks. When a person dies in a traffic accident, the victim does not receive any financial compensation. Rather, the workplace, which the offender driver belongs to, holds the funeral for the victim. Injured people can receive treatment for free at local clinics. In South Korea, car insurance or individual drivers are liable for damage, but that’s not the case in the North.

South Korea has enforced tougher regulations against drunk drivers. In 2018, a young man named Yoon Chang-ho was killed by a drunk driver. Following the tragic incident, an act named after the victim was enacted in 2019. Under the act, offenders face at least three years in jail and up to life imprisonment when their drunk driving results in death. The government is also considering including stern measures against those who “aid and abet” drunk driving in the Road Traffic Act. Lawyer Oh now tells us about punishment for drunk driving in North Korea.

In the North, drunk drivers face various penalties, including fines. When drunk driving leads to death, their license is cancelled permanently and their vehicle is impounded. And they are forced to do hard labor between one and three years.

But crackdowns on drunk driving are sloppy. In South Korea, officers use a machine to measure drivers’ blood alcohol level. In contrast, North Korean officers make a subjective judgment about driving under the influence. They simply smell alcohol on the driver’s breath to determine whether he or she was drunk. So, drivers may have their license suspended or face forced labor just because their breath smells of liquor. On the contrary, in some cases, officers just let some drunken drivers off the hook.

In North Korea, when a person violates a traffic regulation, police officers in uniform run toward the person right away, blowing a whistle, and issue a ticket. The driver’s license in North Korea includes five spaces at the bottom. Each time the license holder violates any rule, a hole is made in one space. When these five spaces are all perforated, the license is cancelled.

Violators of traffic rules in North Korea are required to pay a fine. In some cases, they have their license suspended. In South Korea, speeding and traffic signal violations are detected by electronic devices. In the North, traffic officers, not an electronic system, determine whether or not drivers break the rules and impose a fine on the spot. As a result, drivers often argue with officers or choose to bribe them.

Although drivers may not break any rule, traffic officers often stop their cars and threaten to levy a fine, in the name of directing traffic, to ask them for a bribe. For that reason, North Korean residents avoid traffic officers, calling them a “blue bug,” since the officers usually wear a blue uniform.

In South Korea, people over 18 are allowed to take their driving test. There are three license types—Type 1, Type 2 and the practice license. Vehicles for each license type are stipulated by the Enforcement Regulation of the Road Traffic Act, Attached Table 18. In North Korea, it is not easy to obtain a driver’s license. Unlike in South Korea, it is difficult to find an opportunity to get the license and the relevant process takes a lot longer.

To get a driver’s license in North Korea, people should first enter an automobile driving academy. After a year of training there, they take the driving test. It is difficult even to be admitted to the training academy. At the recommendation of the party or enterprises, model students are selected from high school graduates. So, the door is not open to everyone. After entering the academy, trainees stay together in a camp, like soldiers. For a long-distance driving practice, they have to move around the country for five to six months.

The driving education program is quite difficult because trainees should learn not only driving but vehicle repair and maintenance as well. There are four different grades in the driver’s license. Holders of the Grade 4 license are allowed to drive 5-ton or smaller freight vehicles. Grade 3 is for 2.5-ton freight vehicles, buses and jeeps, while Grade 2 is for passenger cars. To obtain Grade 1, one should be able to design and even build a car. So, it is very challenging to obtain Grade 1.

In North Korea, driving is a highly sought after job as drivers are considered tech workers. It is not easy to get behind the wheel, due to the small number of vehicles. Drivers can travel across the country and find more opportunities to do things and earn money. It seems drivers will continue to enjoy great popularity in North Korea, where freedom of movement, or the right to travel, is not guaranteed.