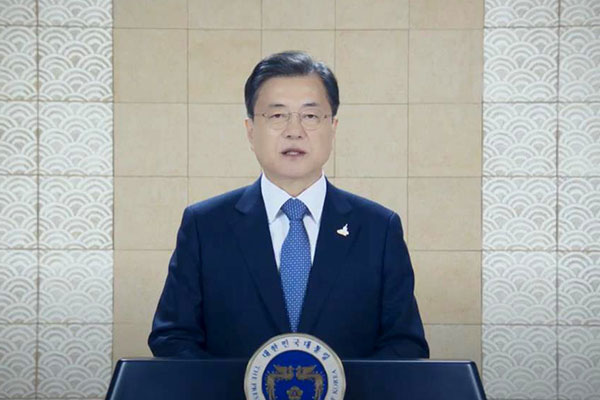 President Moon Jae-in said on Thursday that he hopes South Korea and the United States will cooperate to declare a formal end to the Korean War. Moon made the remarks in a video speech for an annual event of the Korea Society, a New York-based nonprofit aimed at promoting ties between South Korea and the U.S.

President Moon Jae-in is reiterating his call to officially declare the end of the Korean War.

The two Koreas are still technically at war despite the ceasefire signed in 1953.

In a video speech for an annual event of the Korea Society Wednesday, Moon urged Washington to join the peace initiative, which he says will provide a breakthrough in the stalled nuclear talks with North Korea.

"There has been substantive progress made in the peace process on the Korean Peninsula, thanks to the inter-Korean and U.S.-North Korea summit meetings in 2018 and 2019. However, the talks have now stalled and we are catching our breath. We can neither allow any backtracking on hard-earned progress nor change our destination. I hope that our two countries work toward the end-of-war declaration and draw active participation from the international community in this regard. When we not only deter war but also actively create and institutionalize peace, our alliance will be even greater."

The remarks come two weeks after Moon stressed the need for the declaration in his keynote speech at the UN General Assembly.

But during those two weeks, inter-Korean relations only appear to have worsened due to the shooting death of a South Korean fisheries official who drifted into North Korean waters.

Moon said Seoul and Washington will work together to invite North Korea back to dialogue, and start rebuilding trust.

Shortly after the inter-Korean summit in Pyongyang two years ago, cross-border relations started to collapse as the Washington-Pyongyang summit in Hanoi fell through. Seoul has so far been mediating between Washington and Pyongyang while seeking small-scale inter-Korean projects that may not be subject to U.S. nuclear sanctions.