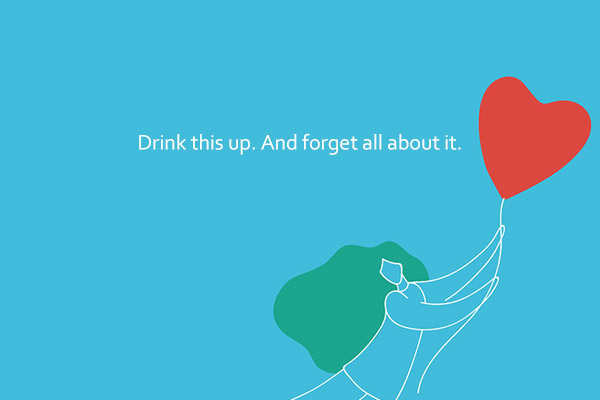 ‘Drink this up. And forget all about it.’

“It was Park Won-jun. A poster with him holding a can of beer and smiling brightly was posted on the store door. He walked out of the poster as if it was the most natural thing in the world. Hyeon-su, do you believe me? Of course not. No one can. But it doesn’t matter. That was just between me and him.”

‘Rub the necklace. I will find you wherever you are.’

“He appeared in front of me whenever I rubbed that necklace. He said he liked my good-natured disposition. He said being nice is not the same as being stupid, that those who exploit my good nature are the bad ones.”

Yang-mi is a very nice girl, which makes her situation so heartbreaking. She works hard and supports her family all by herself. But she never gets anything in return. Deep in her consciousness, she was certainly exhausted from making all those sacrifices and she a thirst for a life of her own. Her suppressed desires created an illusion of Park Won-jun, much like the Genie called out of a magic lamp.

pending money for herself naturally led to less money left for her parents. Yang-mi was afraid that her father would resort to physical violence like he used to during her childhood.

“But what was strange was that they started treating me better. I casually mentioned that my room was too small and my father cautiously suggested that I take the master bedroom. Mom is acting even stranger. She was so stingy that she only gave me kimchi and bean sprouts to eat on my day off but now she gives me meat.”