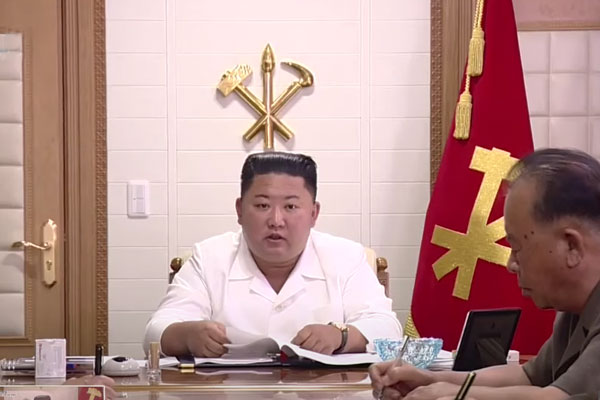 Next year, North Korean leader Kim Jong-un will mark his tenth year in office. North Korea seems to be accelerating the process to strengthen the personality cult around the top leader. On October 23, the nation’s official Rodong Sinmun newspaper said that the April 15 Literary Production Unit released a novel entitled Revival that highlights the leader’s great achievements—the first such novel.

Today, we’ll learn about the communist regime’s efforts to build a cult of personality surrounding its leaders. First, Dr. Bong Young-shik from the Yonsei Institute for North Korean Studies explains the novel Revival in more detail.

According to the paper, Revival shows that the power of national revival lies in human resources and that a nation can confidently lead the world when its society values and develops education to meet the needs of a new century.

In the novel, North Korean leader Kim Jong-un is described as a great leader who gives full support to educators who have devoted their whole lives to nurturing talent.

Speaking of the April 15 Literary Production Unit, the group of North Korean writers has been dedicated solely to writing the achievements of the nation’s top leaders such as Kim Il-sung and Kim Jong-il since its creation in 1967. Other than the latest publication Revival, it previously released The Immortal History series and The Immortal Leadership series, which depict the lives of former leaders Kim Il-sung and Kim Jong-il, respectively.

Attention turns to whether the publication of the first novel about the current leader will be followed by additional measures to promote his personality cult, such as the creation of his portrait and badge and the issuance of new banknotes.

While the portraits of former leaders Kim Il-sung and Kim Jong-il have frequently appeared in the nation’s media, the current leader’s portrait has hardly ever been seen at state agencies or ordinary homes. When Cuban President Miguel Diaz-Canel visited Pyongyang in 2018, huge portraits of Kim Jong-un and Diaz-Canel were on display at the terminal building of Pyongyang Sunan International Airport. It was the first time that Kim’s own portrait was disclosed in public.

It seems the young North Korean leader hopes to be truly admired by his people, rather than adopt mysticism or promote himself as a perfect error-free leader. I think he has changed a way of governing his country and promoting his image in line with demographical and social changes in North Korea. He may have concluded that having a cult of personality will not prove successful in North Korean society, which has changed quite a bit from the era of his predecessors. As his personality cult has not taken root yet, some analysts point out that high officials are not very loyal to the top leader, compared to the years of former leaders.

During the years of Kim Il-sung and Kim Jong-il, North Korea built up the personality cult around the leaders explicitly and systematically. They are described as people with supernatural powers in North Korean textbooks. Poems and writings in Korean and English textbooks as well as lyrics in music books all praise the leaders. The regime brainwashes people from an early age to believe in their leaders as godlike figures. As a result, many North Korean residents worship and deify their leaders. In the North, there is a leader-related manual that citizens must follow.

When the house is on fire, for example, the resident must save the portrait of the leader first, over his or her own valuables, before escaping from the house. In the process, some people might get hurt or even die. But if they fail to take care of the leader’s portrait properly, they will be punished or even executed in the worst-case scenario. If you happen to take photos in North Korea against the backdrop of the statue of Kim Il-sung or Kim Jong-il, you should be extremely careful not to block or cut out the smallest part of the statue image, not even a millimeter.

While writing the name of the leaders, North Koreans should not begin a new line so the name will not be written in two separate lines. They should also avoid names identical or similar to those of the leaders when naming a person. During the Joseon Kingdom, there was a similar practice of not using particular letters when naming someone. In doing so, North Korean people show their absolute respect to their leaders.

Starting with the publication of the new novel about Kim Jong-un, North Korea may carry out the project to idolize the leader openly and quickly. During the former Kim Jong-il era, North Korea produced portraits and badges featuring the leader as well as paper bills depicting his hometown. For the current leader, the North may take similar measures.

Natural disasters and COVID-19 have made the already struggling North Korean economy even more difficult. Leader Kim Jong-un has visited areas hit by floods or landslides to console local residents and to instruct officials to quickly execute the recovery work. It looks like the young leader prefers to approach the people himself rather than strengthen his personality cult.

During a military parade marking the 75th founding anniversary of the ruling Workers’ Party on October 10, he impressed many people with something that his father and grandfather never did. He apologized to his people for their suffering and even shed tears. Perhaps, he got emotional, feeling sorry for his people in economic difficulties and also feeling frustrated about failing to improve public livelihoods. It seems he frankly showed his human side to his people.

But it doesn’t mean North Korea gave up idolizing its leader. Most North Korea experts agree that the nation’s personality cult has moved beyond the level of policy promotion and entered a stage of deifying the leader.

North Korea has built up a strong cult of personality surrounding the ruling Kim family over the last 70 years. As a result, the country has the highest number of statues of leaders and idolization symbols in the world. North Korea legitimized Kim Il-sung’s one-man rule and his absolute power by portraying him as an anti-Japanese revolutionary hero. Beginning in the 1980s, the North spurred the personality cult for his son Kim Jong-il, in an apparent move to prepare for a hereditary power transition. And a similar move is underway for current leader Kim Jong-un. But is this strategy of venerating the three generations of the Kim family effective?

The effect will likely diminish. In North Korea, more than five million people use mobile phones, and it is almost impossible to block outside information from flowing in to the country.

The younger generation is, in fact, cynical about the “mystification” of their leader. According to a North Korean defector named Park Yeon-mi, who was born in Hyesan, Ryanggang Province, in 1993, she and her friends simply did what they were told to do when she was in North Korea. But, in fact, they actually had no loyalty to the regime. She said that those who sang songs praising the regime were actually laughed at and ostracized.

No matter how closed North Korean society is, times have changed. Idolization may have worked during the rule of Kim Il-sung and Kim Jong-il. But things are different in this era of the third-generation leader. As part of the North’s myth-making efforts, it claims that Kim Jong-un was able to drive a car at the age of three. But few people would believe it.

Kim Jong-un has tried to promote his own new leadership by using his predecessors’ image and highlighting his achievements. To become an ideal leader respected by the people, he might be wondering what types of personality cult will be most effective. We’ll have to wait and see how extensively the current leader will push for his own personality cult.