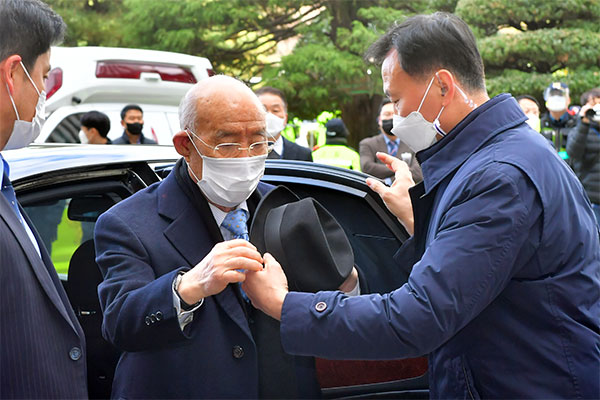 Former President Chun Doo-hwan has been given a suspended jail sentence for defaming a late democratic activist in a high-profile defamation case. The court acknowledged there were shootings from helicopters that targeted citizens during a crackdown in the 1980 Gwangju pro-democracy uprising. The court urged the former leader to sincerely apologize to those affected.

The 89-year-old was indicted in May 2018 for allegedly making slanderous statements against the late Catholic priest Cho Bi-oh's eyewitness accounts of a bloody military suppression of pro-democracy protesters.

In his 2017 memoir, Chun labeled Cho a "liar" and "Satan" for testifying that troops in helicopters fired machine guns at civilians during the uprising.

The court acknowledged that troops did fire at citizens from helicopters and found victims' testimonies sufficiently reliable. It said that given the appraisal by the National Forensic Service, there is reasonable ground to believe there were shootings from helicopters on May 21, 1980.

The court urged the former president, noting he is the most responsible for the events that occurred, to sincerely apologize for the suffering and pain he caused.

But Chun was seen dozing off during the sentencing hearing.

After the hearing, he did not respond to reporter’s questions about whether he accepted the ruling and whether he still denied giving the order to fire at civilians.

But he appeared to resist calls by civic groups demanding that he issue a public apology.

This trial was more than a libel case against an individual as it involved yet another ruling on whether troops fired from helicopters during a crackdown on the 1980 pro-democracy movement.

It's the third time Chun has attended a sentencing hearing following his trials back in 1996 related to the same uprising, a military coup that broke out the previous year and his accumulation of illegal wealth.