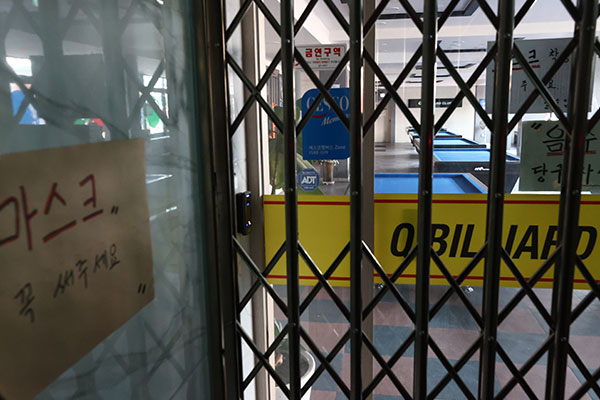 Seoul City has announced what is effectively an emergency no-assembly order past 9 p.m. for facilities placed under general monitoring. It's an effort to curb COVID-19 infections as the capital city has recorded another new high in daily cases.

Under the new measures, movie theaters, internet cafes, video game arcades, academies and study rooms, amusement parks, department stores, supermarkets and beauty-related businesses must all close their doors at 9 p.m. in the evening.

This is in addition to the current Level Two social distancing rules in the metro area, which bans entertainment establishments from opening while restaurants, cafes and indoor sports venues must close by 9 p.m.

Mom and pop stores measuring less than 300 square meters will be allowed to open for people to buy necessities while restaurants can still offer delivery and takeout.

Public facilities including museums, galleries, libraries, concert halls and gyms will be shut down altogether regardless of hours. However welfare centers will be partially open to provide essential care service.

Public transport will also be cut back 30 percent from 9 p.m. The reduction will apply to buses from Saturday and subway services from Tuesday.

The acting mayor said the goal is to lower Seoul's daily infections to below 100 in the next two weeks.

The central government has also designated the four weeks starting Monday as a year-end special quarantine period to curb further spread of COVID-19.

This is according to the Central Disaster and Safety Countermeasures Headquarters on Friday, as it laid out detailed quarantine measures for the period from Monday to January 3.

Authorities asked the public to avoid year-end events and gatherings as much as possible and for religious events to be held virtually. In a bid to encourage spending at eateries without contact, the government will offer discount coupons for mobile app deliveries.

Sales of train tickets will be restricted and inspections will be heightened at seasonal venues, such as ski resorts and skating rinks.