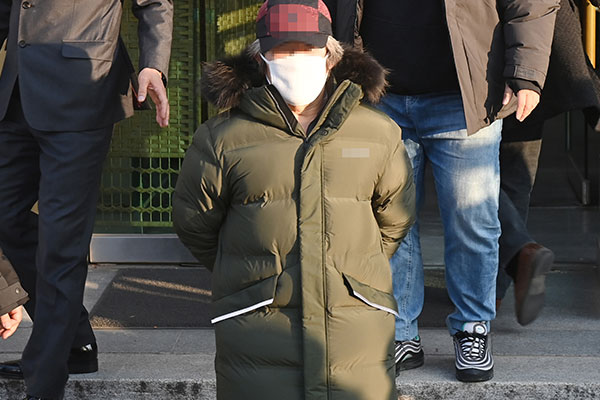 After serving over a decade in prison, notorious child sex offender Cho Doo-soon was released from prison early Saturday at around 7 a.m.

Leaving the Nambu Detention Center in Seoul, he was escorted in an official vehicle to a probation office in Ansan where he was processed to enter an electronic monitoring program, after which he headed home.

He did not answer reporter questions on whether he regretted his crime but a probation officer later told reporters that Cho said he had committed an unpardonable wrongdoing.

The 69-year-old will wear an electronic tracking device on his ankle for seven years under exclusive monitoring from a probation officer. His identity will remain disclosed on a sex offenders information website for five years.

Cho served 12 years in prison for kidnapping and raping an eight-year-old girl in 2008.

The court is expected to impose rules of compliance on his probation, including on alcohol consumption and restrictions on leaving home at night.

A guard post has been set up with a clear view of the entrance to his residence and will be manned around the clock, while 12 officers recruited by Ansan city will take turns patrolling the surrounding area.

Cho's release and his return to Ansan, where he committed the crimes in 2008, has incited fear and anxiety among local residents.