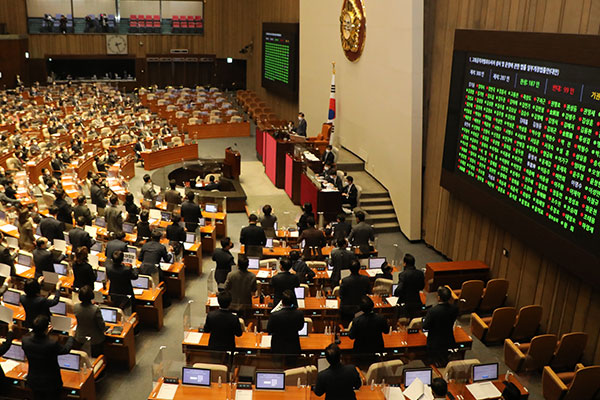 Controversial revisions to a law on setting up the powerful Corruption Investigation Office for High-ranking Officials(CIO) passed the National Assembly on Thursday, with 187 out of 287 lawmakers present supporting the bill. Ninety-nine opposed, while one abstained.

The bill was introduced at Wednesday's plenary meeting on the final day of the Assembly's regular session. Voting, however, was delayed due to a filibuster by the main opposition People Power Party(PPP).

The revisions cut down the quota to endorse the final two CIO chief candidates to five out of seven members of a recommendation panel, compared to the current six. This would effectively eliminate the opposition PPP's veto power.

President Moon Jae-in would select the head of the CIO from the two finalists put forth by the legislature, and the independent agency could be launched despite having missed its legally defined launch deadline in July.

Prior to the plenary vote, ruling Democratic Party(DP) floor leader Kim Tae-nyeon stressed that reforms of institutions of power are the call of the times, then expected the CIO to help create a clean society based on fairness and balance.

Just before Thursday's voting began, the PPP heavily criticized the DP, which holds 176 seats in the 300-member Assembly, for threatening parliamentary democracy by stripping the opposition's legal right to recommendation.

The PPP accuses the ruling camp of rushing the bill through to appoint a CIO head which it favors.

The main opposition has launched another filibuster in an attempt to delay voting on other bills the ruling party is pushing through the Assembly without the opposition's support, including one on reforming the state spy agency.

That filibuster was interrupted on Saturday morning when it was found that a lawmaker present in the National Assembly chamber had been in contact with somebody that had tested positive for COVID-19. The filibuster will be allowed to resume after testing and decontamination measures.