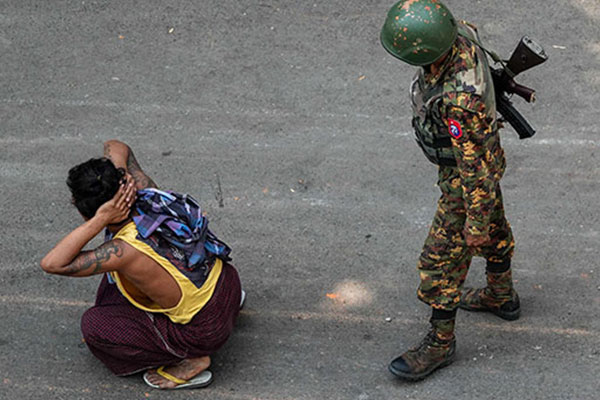 More than 500 civilians have been killed in Myanmar in the violent crackdown of pro-democracy protests by the junta. The Myanmar branch of South Korea's Shinhan Bank temporarily shut down after one of its workers was shot as protests continue across the country over a military coup.

Troops were seen dragging out protesters and opening fire at nearby windows, apparently to make sure the arrest is not being filmed.

Pro-democracy demonstrators have persevered even as their numbers diminish amid violent crackdowns during which hundreds of unarmed civilians were shot in the street.

At least 521 protesters have been killed and over two-thousand-600 detained since the coup in February ousted the democratically elected government.

The Myanmar branch of South Korea's Shinhan Bank has temporarily shut down after one of its workers was shot and taken to a hospital amid a wave of protests, according to the bank on Thursday.

The South Korean Embassy in Myanmar advised Koreans in the region to stay away from balconies or windows, and to erase protest footage from mobile devices.

The U.S. ordered non-essential personnel to leave Myanmar while Germany and Norway are also advising their citizens to evacuate.

The UN Security Council on Wednesday called for urgent action to stop violence in the Southeast Asian country. After a council meeting, British Ambassador to the UN, Barbara Woodward, told reporters that the member states were united in its condemnation.

"We'll continue to closely monitor the situation and work with our colleagues in the council and regional partners to help end this senseless violence, hold those responsible to account and secure a path back to democracy."

As the UNSC discussed Myanmar's military coup on Wednesday, the junta announced a ceasefire with ethnic armed groups, following a series of air strikes in the southeastern part of the country.

The February 1 military coup ousted the government of Aung San Suu Kyi after her National League for Democracy Party won the November elections in a landslide victory. The military claims there was ballot fraud although the electoral commission upheld the results.