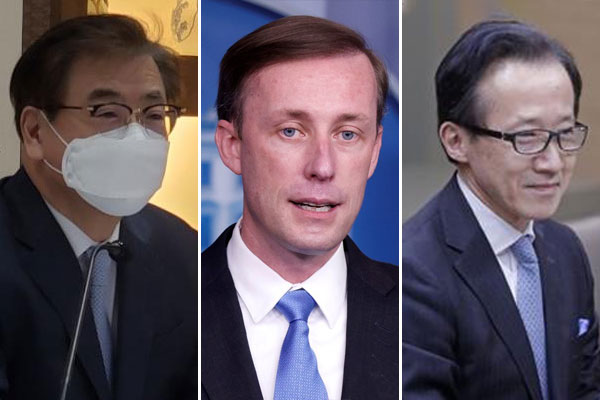 A flurry of diplomatic activities took place last week to address issues on the Korean Peninsula. National Security Advisors of South Korea, the U.S. and Japan held talks in the U.S., while China hosted bilateral talks with South Korea’s foreign ministers. The two separate meetings came at a sensitive time, after North Korea pressed ahead with provocations by launching ballistic missiles. Here’s political commentator Lee Jong-hoon to explain the outcomes and implications of the meetings.

The Biden administration is in the final stages of its North Korea policy review. Against this backdrop, top security advisors from South Korea, the U.S. and Japan made their final consultations on Washington’s new strategy toward North Korea. The foreign ministers’ meeting between South Korea and China shows that the two countries need to coordinate their views on various issues. I think South Korea also sought to arrange a possible state visit by Chinese President Xi Jinping to South Korea in order to facilitate North Korea-U.S. dialogue.

U.S. National Security Advisor Jake Sullivan and his South Korean and Japanese counterparts Suh Hoon and Shigeru Kitamura held talks at the U.S. Naval Academy in Annapolis, Maryland, on April 2. The three-way national security advisors’ dialogue was the first of its kind since the inauguration of the Biden administration. In advace of the trilateral talks, separate one-on-one meetings were held between the U.S. and Japan, between the U.S. and South Korea and between South Korea and Japan. The three countries shared their concerns about North Korea’s nuclear and ballistic missile programs and reaffirmed their commitment to joint cooperation toward enforcing the communist regime’s denuclearization.

The three officials met to consult regarding Washington’s review of its North Korea policy and discuss issues of common concern, including security in the Indo-Pacific region. They discussed North Korea’s denuclearization and saw eye to eye on the need to work together in dealing with North Korea’s nuclear and missile threats. But I think South Korea and the U.S. have different approaches to relevant issues. South Korea maintains its stance that a formal end to the Korean War must be declared first, and then resolving the North Korean nuclear issue step by step by gradually easing sanctions against the North. The Biden administration’s forthcoming North Korea policy, when unveiled, will demonstrate the extent to which it reflects South Korea’s position.

While South Korea stressed the need for a swift resumption of North Korea-U.S. dialogue, the U.S. underlined its full implementation of U.N. Security Council resolutions related to North Korea. This indicates that South Korea and the U.S. maintain slightly different positions with regard to the North Korean nuclear issue.

Attention was also drawn to the potential for the trilateral talks to influence the resumption of North Korea-U.S. dialogue, which has been stalled since their no-deal Hanoi summit in 2019.

It has been confirmed that the U.S. has made recent efforts to contact North Korea. It seems the U.S. is hoping to resume talks as soon as possible. Of course, North Korea also wants to engage in dialogue with the U.S. quickly. But both countries are seeking to gain an advantage over each other before negotiations resume. North Korean leader Kim Jong-un hopes to take up the former proposal that neared an agreement at his second summit with former U.S. President Donald Trump in Hanoi. The Biden administration, on the other hand, prefers to examine its North Korea policy from the ground up. Even if dialogue does resume, the U.S. will insist on holding working-level negotiations before moving on to any summit-level talks. That’s clearly different from what North Korea is seeking. As a result, the two sides may endure a prolonged battle of nerves before negotiations start, delaying the resumption of talks. And even if negotiations do move forward, they will likely proceed at a snail’s pace.

Just a few hours after the meeting between security advisors of South Korea, the U.S. and was held in the U.S., the South Korean Foreign Minister Chung Eui-yong and his Chinese counterpart Wang Yi held talks in Xiamen, in China’s Fujian Province, on April 3. During the talks, South Korea and China intensively discussed ways to develop bilateral relations, ahead of the 30th anniversary of their diplomatic ties next year, as well as the issue of a nuclear-free Korean Peninsula.

Both countries share the view that joint efforts must be made to implement peace on the Korean Peninsula. For that purpose, Chung called for the Chinese government to take an active role, and Wang offered a positive response to the proposal. The Chinese foreign minister also stated that China would work with South Korea toward reaching a political solution to the Korean Peninsula issue through dialogue. It seems China’s use of the expression, “political solution,” implies an approach favored by North Korea.

The U.S. seeks to encircle China by strengthening its partnerships with countries in the Pacific and Indian Oceans, while China is trying to thwart the move. With the Taiwan Strait becoming a source of tension between the two countries, the recent foreign ministers’ meeting between South Korea and China took place in the southeastern Chinese city of Xiamen, not far from Taiwan. I think China deliberately chose this particular venue, as a way of pressuring the U.S. not to provoke or pressure it. Through meeting with the top security advisors of South Korea, and Japan, the U.S., for its part, showed China the strength of this three-way alliance. The two different meetings showed another scene of the U.S.-China rivalry.

Intensifying tension between the U.S. and China has put South Korea in a difficult position, as the two powers are pressuring Seoul to side with one of them. The North Korean issue is one of the tasks that South Korea must undertake in that process.

China tries to strengthen its leverage against the U.S. by using North Korea, while the U.S. seeks to put greater pressure on China by using South Korea. It’s a structure that will remain unchanged, as long as U.S.-China tensions continue. In this tricky situation, South Korea needs to pursue balanced diplomacy. First of all, it’s important to create a favorable environment for North Korea and the U.S. to resume their talks.

While the U.S. focuses on how to respond to threats from North Korea, China agrees on the reasonable security concerns of North Korea. Amid the differences between the stances of the U.S. and China, the South Korean government is growing increasingly anxious about how to settle peace on the divided Korean Peninsula.

Attention turns to the Biden administration’s new North Korea policy, which will be unveiled soon. It seems that the deepening China-U.S. conflict, as well as North Korea’s next moves, will be major factors to influence regional diplomacy.