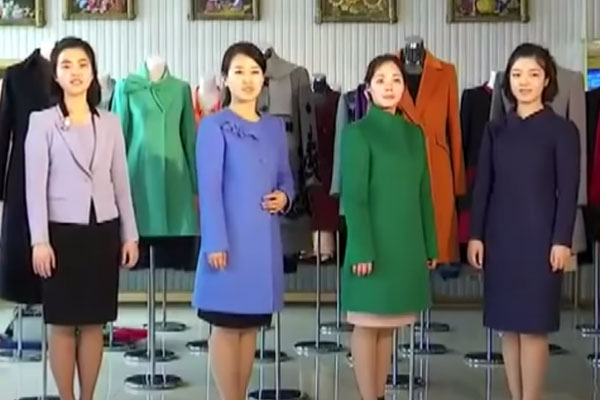 North Korea’s official Rodong Sinmun newspaper has recently published a series of articles that point out problems with local residents’ outfits and makeup as well as their manner of speech. The paper stressed that citizens should conform to social requirements, rather than individual tastes, when dressing themselves, saying that elegant and neat outfits, hair and makeup constitute a very important moral issue. In doing so, it seems North Korea continues to underline its socialist culture once again, demanding that people follow a certain dress code. Today, we’ll learn about fashion trends in North Korea from Professor Park Gye-ri at the Institute for Unification Education.

North Korea has held the Korean National Dress Exhibition in recent years to highlight each season’s fashions. A magazine called Korean Women also shows photos of new designs that are expected to come into fashion in the coming spring or fall season. By reading the magazine, general citizens are able to learn about the latest fashion trends.

Lately, many North Korean men have begun to wear white shirts with grey pants, after leader Kim Jong-un wore the same combination in recent appearances. For women, one-piece dresses and short skirts have been in fashion, and this year many women are also interested in fashion accessories including brooches.

North Korean fashion began to noticeably change around 2000. Until the 1990s, it was often difficult for local residents to obtain items other than rationed goods. In terms of outfits, general citizens all dressed similarly, with the exception of upper-class people who were able to travel overseas. In other words, before 2000, the concept of fashion in North Korea was familiar to only small groups of people, including those engaged in culture and art industries and people residing abroad.

The North Korean rationing system was in place until the mid-1990s. Working clothes and suits for men were available through department stores or state-run shops. Women were encouraged to wear Korean traditional jackets and shirts or two-piece dresses in soft, solid colors. Under the rationing system, very few clothing options were provided, and people were largely unable to purchase other types of outfits. North Korea strictly regulated people who were improperly dressed according to socialist standards, so people had no way to get individualistic clothes even if they wanted to. Those who wanted wear their own distinctive outfits had to make their own or repair old clothes.

Beginning in the 2000s, more and more ordinary citizens in North Korea began to show an interest in fashion. It was a change driven by the so-called jangmadang or private markets. With the collapse of North Korea’s state rationing system in the 1990s, new and used clothing from China began to enter North Korea through the jangmadang. Trade of second-hand clothes was a realistic option, considering the purchasing power of North Korean people. The garments that flowed into North Korea through the jangamdang were reprocessed locally to drive change in the country’s fashion industry.

At first, apparel manufacturing in North Korea was geared toward cutting down prices. But gradually, clothes began to reflect the tastes of local consumers. A few people who were skilled in handcrafts made clothes at first, but the size of clothing production soon increased to give rise to garment factories. As time went by, I imagine the factories got the knack for design, such as how to cut the waist line, and began to improve the quality of their products.

Amid international sanctions on North Korea, leader Kim Jong-un has sought to foster the light industries in the belief that it is important to produce consumer goods internally. As a result, the fashion industry has received some state support.

In 2006, an article in the publication Korean Women, the mouthpiece of the Korean Democratic Women’s Union, expressed concern about new, foreign fashion styles spreading through North Korean society. The article claimed, “Some people blindly imitate clothing of other countries, but some decadent, anomalous outfits from capitalistic society are not really fit for our noble minds and customs. They contain elements that may ruin our sound society.”

Judging by this article, it is clear that various types of clothes had already appeared in North Korea by 2006. Since then, North Korean fashion styles have undergone major changes, mainly led by leader Kim Jong-un’s wife Ri Sol-ju.

Ri Sol-ju was thrust into the spotlight when she appeared at an opening ceremony for the Rungra People’s Pleasure Ground in 2012, holding onto her husband’s arm. In North Korea, women are recommended to avoid tight-fitting clothes and showy patterns, but the first lady showed up to the event wearing a yellow polka-dot one-piece dress.

When she appeared at the truce village of Panmunjom during the inter-Korean summit in April 2018, she wore a skirt which extended to only around 5 centimeters from her knees, so when she sat down, the skirt rose above the knees. The so-called “Chanel line” is regarded as an ideal skirt length in North Korea, with the first lady demonstrating North Korea’s typical, socialist fashion style. Previously, fashion trends were dominated by clothes from China, South Korea and Japan traded at the jangmadang. But Ri emerged as North Korea’s fashion leader, becoming a source of inspiration for fashion and makeup trends in the country.

Kim Yo-jong has never been seen wearing pants. She has always worn a skirt, even while running. She has never worn one-piece dresses, either. She prefers tidy H-line two-piece suits, which are typical office outfits of working women in the North. But she still dresses up by wearing blouses with beautiful designs or pearl decorations on her neck. Overall, she projects a classy, neat and stylish look. These days, her skirts seem to be getting shorter, often tailored to show her knees even when she stands up. I think this style will spread quickly among many working women in North Korea, creating a new trend of short skirts in the country.

These changes in North Korean fashion styles came from the jangmadang, which is working and expanding based on the principle of commercial capitalism. Over the years, garments flowing into the country through various channels have broadened the available fashion choices for local citizens and created trends that never existed before in the communist state.

Next time, we’ll talk about changes in fashion items in North Korea.