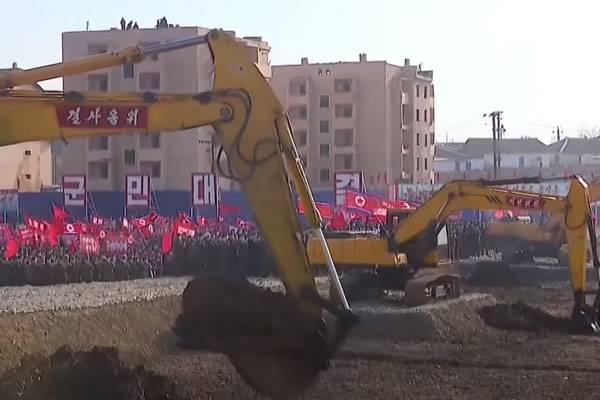 At the eighth congress of the Workers’ Party in January, North Korea announced a five-year economic development plan, including the construction of 50-thousand apartments in Pyongyang alone by the year 2025.

Why is North Korea so committed to housing construction, amid the ongoing difficulties triggered by international sanctions and the COVID-19 pandemic? Here’s political commentator Choi Young-il to explain.

During the party congress in January, leader Kim Jong-un promised to build 50-thousand apartments in Pyongyang over the next five years, with the goal of constructing 10-thousand units annually. North Korean media have devoted a great deal of space to this topic lately, in an apparent bid to highlight the project aimed at improving public livelihoods as well as the leader’s achievement.

North Korea may lose public trust if it fails to resolve the economic problems faced by the people. This sense of crisis is prodding the country into pushing ahead with housing construction. Also, North Korea may have concluded that it can carry out the construction project internally without bringing in a large amount of materials from outside, especially at a time when its trade is suspended.

North Korea has built new towns in Pyongyang since the current leader came to power. They include the Changjon Street that was completed in 2012, the Mirae Scientists Street in 2015 and the Ryomyong Street in 2017. At present, 16-thousand homes are under construction in Pyongyang. And North Korea plans to construct 50-thousand flats in the capital additionally by 2025.

According to a CIA report last year, 12 percent of the North Korean population concentrates in Pyongyang. North Korea mapped out a plan to restore Pyongyang City during the Korean War in 1951 in an effort to reconstruct the capital, as a large part of the city was destroyed by the U.S. aerial bombing.

After the war, North Korea pushed for plans to create Pyongyang as an ideal socialist city with the assistance of the Soviet Union and socialist states in Eastern Europe. Houses that were constructed in the process have now become very outdated. The North Korean economy has not improved since the late 1980s, and it has repeatedly missed the timing to rebuild or renovate the old buildings. About ten years ago, North Korea drew up a plan to build 100-thousand apartment units. But it failed to execute the project as planned. Obviously, there is a shortage of housing in Pyongyang. Resolving this problem is one of the regime’s urgent tasks.

As his first on-site inspection this year, leader Kim Jong-un attended a groundbreaking ceremony on March 23 for the construction of 10-thousand homes in the Songsin and Songhwa districts. Starting with these areas, North Korea plans to build 10-thousand new homes a year in the Sopo, Kumchon and September 9 Street areas. Those areas are far from central Pyongyang.

The Songsin and Songhwa districts in eastern Pyongyang have subway stations such as Songsin Station and East Pyongyang Station. The Sopo area in northern Pyongyang is close to an airport, and the September 9 Street is about 8 kilometers east of the Sopo area. The areas are a long way from the center of Pyongyang.

In central Pyongyang, many buildings are outdated. But to show some sort of result to the people quickly, it is better to build new apartments in outlying areas of Pyongyang than to demolish old ones in the central area and rebuild them, in terms of cost and propaganda purposes. Under the housing construction plan, new homes will be built in the eastern and northern corners of Pyongyang.

Apart from the plan to build 10-thousand flats, North Korea has started another project of constructing 800 riverside terraced apartments along the Potong River in the central part of Pyongyang.

This area is considered an affluent neighborhood where high officials of the Cabinet and the party live. Leader Kim Jong-un says that the new houses will be provided, as gifts, to those who have devoted themselves to the state. In doing so, North Korea seems to be encouraging people to produce some results and strengthen internal unity.

North Korea says that the houses are for people of distinguished services. A birds-eye view of the new apartments shows that they are quite beautiful. The area is close to the Mansudae Assembly Hall, where the Supreme People’s Assembly holds meetings, and to Kim Il-sung Square, where important political events are held. It is connected directly to Pyongyang Station, and the headquarters of the Workers’ Party is nearby. In a word, the 800 new homes will be built in an area that is considered the city’s prime location. North Korea says that they will be given to meritorious people including scientists, educators and writers. But it’s assumed that only 20 percent of the houses will be provided to such citizens, while the others will go to high officials of the party. I imagine those who are admitted to the riverside terraced houses are people who can wield some sort of power in Pyongyang.

To show off Pyongyang as a well-planned socialist city, North Korea seeks to construct buildings quickly and effectively. For that purpose, it mobilizes soldiers. The housing construction work should proceed no matter what, as the top leader called it a very important party project. During the groundbreaking ceremony in March, the leader handed the flag of the construction command over to Defense Minister Kim Jong-gwan.

During the party congress, North Korea also announced a plan to build 25-thousand homes in the Komdok area of South Hamgyong Province. High-rise buildings are being built in the northwestern city of Sinuiju, bordering China. It seems houses are under construction in various parts of North Korea.

But large-scale construction plans, including the ones related to the Pyongyang General Hospital and the Wonsan-Kalma coastal tourist area, have been delayed due to economic difficulties. It is questionable if North Korea can carry out the new housing construction project smoothly.

The biggest problem is the economic difficulties. North Korea might be able to mobilize labor somehow with military units. But even if it may supply construction materials internally, the construction plan is all about funding. With North Korea putting so much effort into developing new weapons, it is doubtful that the country can wage the so-called “speed battle” successfully with labor alone. North Korea will press ahead with the construction plan using all resources available, in order to show visible results to the people. But in reality, it will be far from easy to do so.

The key is when North Korea will communicate with the outside world to get the sanctions lifted. Pyongyang may approach the U.S. first and probably South Korea later. We’ll have to wait and see how the North will propose inter-Korean dialogue.

Under Kim Jong-un’s leadership, the housing construction work in Pyongyang faces another turning point. It remains to be seen if the project will continue as planned.